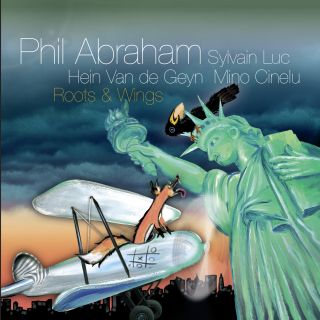 Catalog number: CHR 70182
Releasedate: 03-10-14
This is the story of a proud raven and a clever fox. So basically, the raven is sitting on top of a tree holding a big fat cheese in its beak. And the clever fox who is very interested in the cheese tells the raven how wonderful he looks and that he would love to hear his voice. So, the raven is all chuffed, he opens his beak to sing and drops the cheese. The fox tells the morale of the story which is that vanity is not nice and it has just cost the raven a big fat cheese. The story is in French but all non-French speakers have to listen to the music of the language and try to guess what's happening. Some key words: the raven is "le corbeau" in French, the fox is "le renard", the cheese is "le fromage". So listen carefully to the sound of French. At the end of the day, isn't the trombone the best international language?
After studying the classical piano, the guitar and harmony, Phil Abraham was seduced by jazz and the trombone, on which he is self-taught. His stylistic evolution is parallel to the history of jazz, and even if he is a modern soloist today, he has worked with a wide variety of great musicians.

Phil has taken part in more than fifty albums, ten with his own group, with which he won many prizes. He has often been invited in big bands as a soloist. He took part in many recordings and concerts of the big band of the Belgian Radio (BRT). Phil Abraham also devotes his career to teaching, training courses and master-classes. He was a teacher of vocal improvisation in Antwerp and Brussels. He is now a jazz and trombone teacher at the Brussels Royal Conservatory and at the National Conservatory in Douai (France).

Awards
1988: first Prize at the International Jazz Contest in Sorgues (France)
1989: Prize of the Best Soloist at the "Concours de la Défense" in Paris
1998: chosen as the best Belgian and European trombone player by the listeners of the Belgian radio and the Belgian critics
1999: elected once again the best Belgian and European jazz trombonist
2000: second Prize at the International Contest of jazz soloists in Monaco.

Events
Was chosen by the Belgian Radio (BRT) to represent Belgium in the Big Band of the European Broadcasting Union in Strasbourg (France). Was invited in 1994 as a soloist at the Moscow Concert Hall for a TV concert with the Moscow Big Band. Was the first Belgian Jazzman to be a member of the "Orchestre National de Jazz" in France, that he joined for 3 years with Laurent CUGNY, then stayed with Didier LEVALLET for additional 3 years. Replaced Bob BROOKMEYER in Michel PETRUCCIANI sextet, with Victor JONES (drs), Anthony JACKSON (bass), Flavio BOLTRO (tp) and Stefano DI BATTISTA (sax). Participated (1998) in the album "Jazznavour" of the French singer Charles AZNAVOUR, in which he played all the trombone parts. Other participants include Jacky TERRASSON (p), André CECCARELLI (drs), Remy VIGNOLO (b). Arrangements are by Pierre DREVET (tp) and there are other celebrity guests like Michel PETRUCCIANI, Diane REEVES, Richard GALLIANO and Eddy LOUIS ...
Was a member of the International Dusko GOYKOVICH Big Band (February 2004) for a big TV-concert in Belgrade supported by the Minister of Culture.