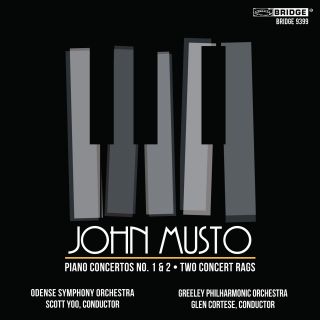 Concertos and Rags for Piano

In recent years, John Musto has been praised as one of America’s great musical talents. Fanfare magazine called him “not just the leading vocal composer of his generation, but perhaps also the leading one of opera.” Musto’s operas, his chamber music, and his prolific catalog of songs and song cycles have been performed and recorded by a plethora of leading artists, giving us a very clear picture of his range and accomplishment. Missing until now, however, has been a recording of two of his major works- the two concertos for piano and orchestra. This recording presents Musto’s own superb interpretations of his two concertos- No. 1, a thirty- minute dark, brooding score; and No. 2 a joyous and extroverted celebration. As encores, Musto performs two of his delicious Concert Rags. These other John Musto recordings are available on Bridge: Songs of John Musto (BRIDGE 9286); the opera, Bastianello (BRIDGE 9299A/B).