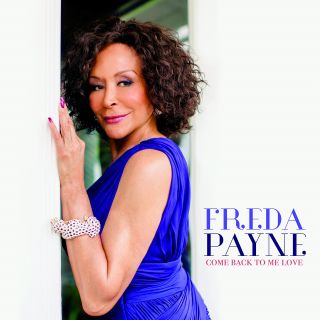 Come Back To Me Love

Catalog number: ART 7044
Releasedate: 25-07-14
As iconic in 2014 for her timeless beauty and stage appeal as she is for her artistic versatility, Freda Payne remains among music’s and show business’ brightest shining star survivors. Her latest album, Come Back To Me Love (her first for the Artistry Music imprint) marks not only a return to the big band and stringsladen classics from her mid-`60s beginnings with Impulse! but also marks a return to her hometown of Detroit. That makes this 14-song album featuring Grammy® award-winner Bill Cunliffe’s musical arrangements—from the vibes-kissed Kenny Rankin waltz “Haven’t We Met” to the lonely evening fireplace musings of “Lately”—a beautiful homecoming.

“It’s a dream come true,” Payne enthuses with a smile, “Just like in 1968 when I was living in New York seeking my fame and fortune, and ran into Brian Holland of Holland-Dozier-Holland. He told me they had just left Motown and started their own company, Invictus. I flew back to Detroit, signed with them and a year later had a Top 5 record, ‘Band of Gold.’ So releasing this album on Mack Avenue’s Artistry Music imprint is truly serendipitous—a flashback to something really good happening for me at home in Detroit, my good luck charm.”

Come Back To Me Love features six selections penned by Mack Avenue owner Gretchen Valade and cowriter Tom Robinson (including the title track as well as “You Don’t Know” and “I Should Have Told Him”) paired with eight selections of golden favorites such as the torchy “Guess I’ll Hang My Tears Out To Dry” and the blues boiler “I’d Rather Drink Muddy Water.” When asked whom she would like to work with on the project, she called upon a more recent associate of hers, Los Angeles-based pianist/arranger/producer Bill Cunliffe. She first worked with him as the accompanist in her in her acclaimed Ella: The First Lady of Song engagement at Catalina Bar & Grill in Hollywood. “I told them Bill was at the top of my list,” Freda insists. “Bill is an excellent musician, easy to get along with and respects my ideas.”

Come Back To Me Love is split between powerful big band jazz and classy contemporary pop with strings. “I reviewed about 20 songs penned by Ms. Valade and Mr. Robinson. I’d go to Bill’s—sit and listen to the CDs—and we got them down to the six best for us. It was the combination of the musicality and the lyrics that got me…all about love in all its dimensions…all reflecting what people go through in life, including me.” For the remaining eight selections, Payne picked longtime favorites that she’d always wanted to do but had never recorded or performed before. The exception was “Spring Can Really Hang You Up The Most,” which she had been using in live performances but had not yet recorded, done in a breathtaking piano and vocals-only pairing. “I remember ‘Midnight Sun’ from Lionel Hampton—I was once his band’s singer; I got to know him and his wife Gladys,” Freda adds. “And I remember ‘Save Your Love For Me’ from when I first went to New York City and heard Cannonball Adderley’s version with Nancy Wilson.”

Asked if much has changed since those first 1963 jazz recordings, she marvels, “In `63 I was nervous as hell—uptight and pushing too hard to be perfect. This time I felt like I was in heaven. I was in Capitol Records’ Studio A [another company she recorded for in the mid-`70s] with 40 musicians, singing over impeccable arrangements. I was much more relaxed and secure within myself. One of my favorite vocal performances is ‘The Island’ [from the musical pens of Brazil’s Ivan Lins and Vitor Martins with English lyrics by husband-and wife-team Alan and Marilyn Bergman]. The song is so intimate, sexual and spiritual all at the same time. The sound of Bill Cunliffe’s orchestration just enveloped and transfixed me...I was taken to another place and just went with it in my vocal.”

Come Back to Me Love—on which every instrumental solo sounds like it was played by someone who had a crush on her at one time or another—Ms. Freda Charcelia Payne will be swinging on a star for this, her return to jazz and Detroit.