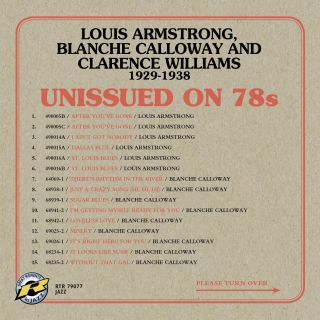 Catalog number: RTR 79077
Releasedate: 26-09-14
“Unissued on 78s means just that and no more”. Certainly some of the recordings here have appeared on LPs and CDs, but long enough ago to have become collectible in their own night.

In 1929 Louis Armstrong’s trumpet playing was at its most majestic. The sides we have here were made under somewhat odd circumstances in that they are part of a mysterious matrix series of which no paper record exists. Indeed for many years they remained totally undiscovered until it was found that they were non-vocal takes from three sessions recorded in late November and early December 1929. What the purpose of these sessions was we’ll probably never know; maybe they were intended for the Latin-American or German markets, but it then was realised that Louis’ inimitable instrumental singing style, where language became almost irrelevant, was acceptable and indeed enjoyed, even in places where English vocals were usually a minus point. Who knows? Whatever the reason, we are lucky to have six examples of Louis Armstrong at his best. The first title was recorded with Carroll Dickerson’s Orchestra with whom Louis was appearing as their star performer at the time. The rest are with the great Luis Russell Orchestra and one very interesting thing occurs. On most Armstrong records of the ‘30s he is the only featured soloist and certainly the only featured trumpet player, but on ‘St. Louis Blues’ we have fine solos, not only from the likes of trombonist J.C. Higginbotham, but also from Henry ‘Red’ Allen, who was at the time widely regarded as Louis’ possible successor, or even rather disparaged as a Louis copyist. However Red’s more angular phrasing and slightly more adventurous harmonic sense show him to have been a great original talent. And it’s all driven along by the splendid Russell rhythm section propelled by the great Pops Foster.

Vocalist Blanche Calloway (b. Baltimore, Maryland 1902 d. Baltimore, Maryland 16 December, 1978) was the elder sister of famous
bandleader Cab Calloway. By the mid-twenties she was already a seasoned and popular performer in revues and black vaudeville.
She was featured in “Plantation Days” in Chicago when she helped Cab to join her and he worked with her for a year or so. In 1931 she was fronting Andy Kirk’s fine Twelve Clouds of Joy for a residency at the Pearl Theatre in Philadelphia when she made the first session here under the name of Blanche Calloway and her Joy Boys. The gig was so successful that she soon formed a band of her own which she led until 1938 when she hit a bad patch and eventually went bankrupt. In later years she worked as a single act, became the director of a Florida radio station and ended by founding the Afram Cosmetic Company. The remaining titles, all alternate takes, show a definitely
hot band containing good soloists who get space in which to shine. An interesting point re “Sugar Blues”: The white “novelty” trumpet player Clyde McCoy made a career of this number in a version using various odd muted sounds, which became hugely popular, so much so that he recorded it again in the ‘30s and yet again in the ‘40s, (I suspect he made a further version in the ‘50’s). His original record was made on 22nd January 1931, yet trumpeter Edgar Battle makes almost a carbon copy on Callaway’s version, recorded on 27th March 1931. How and why? McCoy’s record can have only just been released and had not had time to become so famous that it was worth making a ‘cover’ version. Very strange!

Clarence Williams was a native of Plaquemine Delta, Louisiana, where he was born on 5th October 1898, and before he died in New York on 6th December 1965 he had made an indelible mark on jazz history as pianist, vocalist, songwriter and most importantly, as a talent scout for the Okeh Company and leader of countless record sessions between the early 20s and the end of the 1930s.

On some of the resulting records a young Louis Armstrong, fresh from King Oliver’s Band got his first major solo opportunities, sometimes paired with a Williams discovery making his first records, none other than Sidney Bechet. Other Williams record alumni
including his wife, the fine singer Eva Taylor, Buster Bailey, Eddie Lang, James P Johnson, Coleman Hawkins, Cecil Scott, Ed Allen and many more. Among his best known compositions are ‘Royal Garden Blues’, ‘Baby, Won’t You Please Come Home’, ‘I Ain’t Gonna Give Nobody None of This Jelly Roll’ and as a music publisher his catalogue contained such great standards as ‘Shout, Sister, Shout’, ‘Sugar Blues’ and ‘Squeeze Me’. He was a pioneer black radio performer in the late ‘20s and on through the ‘30s. Most of his recordings vary very little in style from the earliest to the last. Usually he used a small group - often featuring Ed Allen and Cecil Scott resulting in solid unpretentious jazz and it remains very listenable, mostly light hearted, listening today.