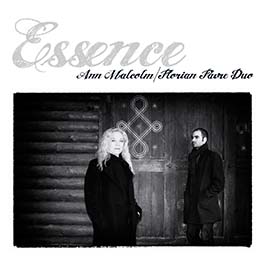 Catalog number: MR 874562
Releasedate: 20-06-14
'Essence' demonstrates how little embellishment a song actually needs, beyond any banality, to get under your skin. That's the fine art of "less is more", and Ann Malcolm / Florian Favre are true masters of this genre.
Ann Malcolm can look back on an impressive, colourful career as a singer and saxophonist. Her roots are in Iowa USA, but for many years she has been living and working in Europe, where she maintains close contact with the up-and-coming names in the jazz scene through her teaching activities.
The Swiss pianist and composer Florian Favre is one of those talents who has drawn the attention of the artist Ann Malcolm. Florian Favre seems to be almost obsessed by piano; always on the quest for new tones, he finds his adventures between the notes of the keyboard. And at the same time, he also pursued a career as a professional footballer (with very good results) right up until his graduation.

Malcolm met Favre for the first time at a concert in Bern in May 2012, just as he was completing his master's degree at the local University of the Arts. This encounter turned out to be the birth of the Ann Malcolm / Florian Favre Duo: "some time later, I decided on an impulse to call him and ask if he had the time to play a little together. I had been thinking that I wanted to record some songs
that I felt close to and often did on concerts. I had in mind that I wanted to do short, intimate and very concentrated versions. In their essence, so to speak.
Well, Florian and I met and played more than three hours together - and I knew, I wanted to make these recordings together with Florian."

'Essence' has become the very personal, almost intimate musical diary of two artists washed on to the same shore by chance (or maybe prescience?), and who inevitably found a common language there.
"How Deep Is The Ocean?" was deliberately chosen as the opening track of the album: "It's a song of questions - children's questions almost, like 'how high is the sky?', and I carry on with 'and if I ever lost you, how much would I cry?'
Actually, I think the ocean is a very good metaphor for music in general; it's constantly in motion, its boundaries are constantly changing, it touches its shores in very different ways but always enters into an individual and intensive relationship with them. A fundamental process, which in all its simplicity, is valid for all time.