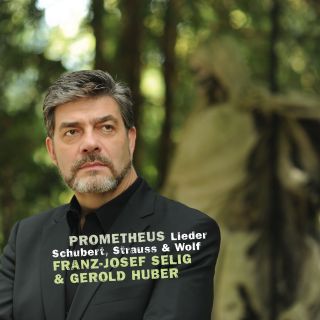 This is the first Solo Album by the bass Franz-Josef Selig, who is of course one of the most significant bass voices since years in the opera section. Now he takes on the bass Lieder of three important Lieder specialists together with his accompanist Gerold Huber.

Franz-Josef Selig has made his personal reflection on the selection of Lieder on this CD: ....." a sombre collection of lieder such as this one does not have to be taken at face value as something merely sinister or depressing, but hopefully also as an invitation to face our own mortality with courage: an ongoing attempt to prepare for that which is intangible and unavoidable. How wonderful, then, if one day we could say to Nature, like the poet in Richard Strauss’s song Das Tal: “So quietly open your mouth, accept me, close it once more, and go on blooming, healthy and cheerful as always”. (Franz-Josef Selig)

FRANZ-JOSEF SELIG bass
During the course of a stage career that has spanned more than twenty years, Franz-Josef Selig has
established himself on the international arena as one of the most well known performers of serious bass
parts – particularly Gurnemanz, King Marke, Sarastro, Rocco, Osmin, Daland, Fiesco and Fasolt. Bass singer
Franz-Josef Selig first studied church music at the Staatliche Hochschule für Musik, Cologne before taking
voice classes under Claudio Nicolai. He was a member of the Aalto Theatre ensemble in Essen from 1989
to 1995. Franz-Josef Selig has been a freelance singer since then and has given guest performances at
all of the world’s great opera houses such as Wiener Staatsoper, Royal Opera Covent Garden, La Scala di
Milano, Staatsoper Hamburg, Opéra de la Bastille, Théâtre du Châtelet in Paris, the Metropolitan Opera New
York, Lyric Opera of Chicago, Théâtre de la Monnaie Brussels, Deutsche Oper Berlin or Bavarian State Opera
Munich. In the summer of 2012 Franz-Josef Selig made his debut at the Bayreuth Festival.
Despite his worldwide concert and opera engagements Franz-Josef Selig still finds time for recitals. A favourite
project of the singer is the Liedertafel with Markus Schäfer, Christian Elsner and Michael Volle, as well as
Gerold Huber as pianist. With the programm of his Lieder recital CD he will appear in many other concert
cycles over the next years.
His affinity to earyl music can bee seen in cooperation with Nikolaus Harnoncourt and the Concentus
Musicus Wien, with Philippe Herreweghe, René Jacobs or the Akademie für Alte Musik Berlin. Numerous
CD and DVD productions – from Bach’s St. Matthew Passion via Mozart’s Magic Flute (Royal Opera London/
Sir Colin Davis), Don Giovanni (Wiener Staatsoper/Riccardo Muti) and Le nozze di Figaro (Salzburger Festspiele/
Nikolaus Harnoncourt), Weber’s Abu Hassan and Busoni’s Turandot to the Deutsche Grammophon
recording of Wagner’s Parsifal under Christian Thielemann – show Franz-Josef Selig’s broad artistic spectrum.
This CD is Franz-Josef Selig's first solo album.
GEROLD HUBER piano
Gerold Huber, pianist of international standing and winner of two coveted "Echo"
prizes, was born in 1969 in Straubing, Bavaria. He won a grant to the Munich Hochschule
für Musik, studying piano with Friedemann Berger and Lied interpreation with
Helmut Deutsch, and was a participant in Dietrich Fischer-Dieskau's masterclass
in Berlin. In 1998 he won the Prix International Pro Musicis in Paris. In 2001 he
was one of the prizewinners at the highly specialized Johann Sebastian Bach
International Piano Competition in Saarbrücken.
An experienced and dedicated classical lied accompanist, Gerold Huber has made
countless guest appearances not only at most of the worldwide famous concert halls
but also at various significant festivals, notably the Schubertiades in Schwarzenberg
(Austria) and Vilabertran (Spain), the Rheingau Musikfestival and the Schleswig-
Holstein Festival, as well as featuring in festivals in Cheltenham (England) and
Saintes (France). His extensive list of performance venues also includes major
international concert halls such as the Cologne Philharmonic Hall, Frankfurt's
Alte Oper, the Leipzig Gewandhaus, the Vienna Konzerthaus, the Konzertgebouw
Amsterdam, the Wigmore Hall in London and the Frick Collection in New York.
Gerold Huber's solo performances to date have largely showcased the works of Bach,
Beethoven, Schubert and Brahms. His recordings of Schubert's Winterreise (2002)
and Die schöne Müllerin (2004) were both awarded the hotly-contested Echo-Klassik
prize. Amongst the soloists regularly accompanied by Gerold Huber are Christian
Gerhaher, Ruth Ziesak, Franz-Josef Selig, Cornelia Kallisch, Diana Damrau, the
Liedertafel ensemble and Susanne Brantl. www.gerold-huber.de