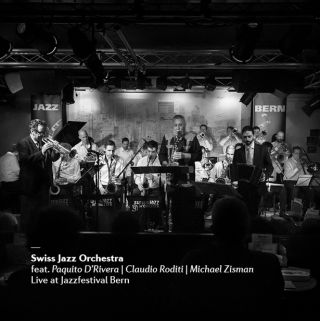 Catalog number: MR 874550
Releasedate: 30-12-13
A brilliant big band sound, coupled with the musical virtuosity of the guests and emotional, enthusiastic playing characterise this live recording. Let yourself get carried away!
With the idea of forming a Swiss big band of international renown, the "Swiss Jazz Orchestra" (SJO) was founded in September 2003 by George Robert and Stefan Geiser in Bern. Following the example of New York's "Vanguard Orchestra", the SJO has performed weekly in Bern ever since.With their roots deeply anchored in jazz, the hallmark of this extremely lively orchestra, filled with leading Swiss professional jazz musicians, is the stylistic diversity of the repertoire. On the first Monday of every month, for example, they play "Latin Night". Anyone who at first glance
thinks that typical "latin jazz" (a musical cross-over between jazz and Caribbean music such as Afro Cuban jazz on the one hand and Brazilian music like Samba and Bossa Nova on the other) wouldn’t suit a resident big band in rather easy-going Bern will definitely get the shock of their life when they visit "Latin Night".

This stylistic aspect of the SJO had not been documented on any of their seven previously released albums, a gap that is now filled in the best way possible by the live album "Swiss Jazz Orchestra feat. Paquito D' Rivera, Claudio Roditi & Michael Zisman - Live at Jazz Festival Bern". With the Brazilian star trumpeter Claudio Roditi, the Cuban saxophonist and clarinetist Paquito D' Rivera and the Argentine-Swiss bandoneon player Michael Zisman, the SJO has gained three illustrious guests - qualified personnel at its best for all things Latin, so to speak... In addition to classics from the
repertoires of Roditi, D' Rivera and Zisman, two exclusive arrangements by the SJO composers Philip Henzi and John Walter can be heard among others.