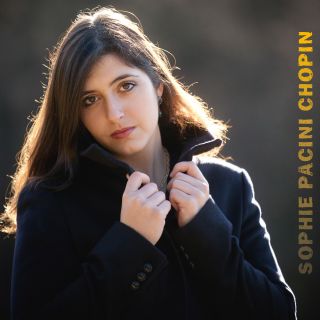 More than any other genre in Chopin’s music, the nocturnes show him in his role as a charmer of the Paris salons.

The Nocturne op. 48/1 is one of Sophie Pacini’s favourite works: she still remembers it from a scene in the Academy-Awardwinning
film Nuovo Cinema Paradiso. Tornatore’s cinematic masterpiece features a fragmented narrative structure that intermingles the past with the present – for instance by incorporating sequences from other films. Describing her success as a performer, Pacini puts it in a nutshell: ”I want to be a musical interpreter, not a keyboard daredevil”.
SOPHIE PACINI piano
Sophie Pacini graduated with honors from Salzburg Mozarteum, where she studied in the classes of
Karl-Heinz Kämmerling and Pavel Gililov; during her studies she also actively participated in masterclasses
given by Dmitri Bashkirov and Fou Ts'ong. In 2010 she met Martha Argerich, who invited her to perform
at the Progetto Martha Argerich festival in Lugano, Switzerland.
Born in 1991 in Munich, Sophie Pacini makes regular appearances at distinguished music venues including
the Hamburg Laeiszhalle, Zurich Tonhalle, the Herkulessaal in Munich and the Berlin Konzerthaus. The
renowned music festivals of Lockenhaus, Salzburg and Schwetzingen have invited her as a guest performer.
Appearances with orchestras such as the Dresden Philharmonic, the Lucerne Symphony, Niedersächsischer
Staatsorchester Hannover and the Tokyo Philharmonic have counted among the highlights in her career.
Sophie Pacini has won a number of prizes including the Groupe Edmund de Rothschild Prize at the Gstaad
Musical Summit, which led to a recording of Schumann and Mozart piano concertos with the German State
Philharmonic of Rheinland-Pfalz. In 2011 she was awarded the Deutschlandfunk Advancement Prize at the
Musikfest Bremen, which led to her first solo piano recording featuring works by Schumann and Liszt,
released by CAvi-Music in 2012.
The Dortmund Mozart Society has sponsored Sophie Pacini with a scholarship since 2013.