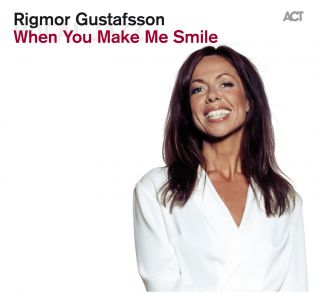 When You Make Me Smile

Rigmor Gustafsson was never one of those brooding, introverted singers. The Blues were never her thing either, even though she definitely knows how to arouse emotions with powerful ballads. But no, that would mean pretending to be something she is not, and pretence is pretty much the last thing that comes to mind when you think of Gustafsson. Having grown up on a farm in Värmland in the heart of Sweden, learned her trade in New York and become a star all around Europe, she is the kind of girl who wears her soul on her sleeve. With her naturalness she enchants her audiences, and for them she gives her all. It comes as no surprise that the word “you” can be found in the titles of all of her ACT albums, like on her sixth and latest “When You Make Me Smile”.

Gustafsson has always known that her personality comes out best when singing melodious jazz. To do that realisation justice, she seeks out special music-making constellations and fascinating combinations, like with pianist Jacky Terrasson (“Close To You”) or with the radio.string.quartet.vienna (“Calling You”). Opulent jazz, where possible refined with strings, has always been a special love affair of hers, something that can also be recognised in her interpretation of the film melodies of Michel Legrand (“On My Way To You”).
On “When You Make me Smile”, she now takes this to the next level: In addition to her “working band”, with the trusted companions Jonas Östholm on the piano, Martin Höper on bass and Jonas Holgersson on the drums, she not only gathers an illustrious team of guests around her, like the woodwind and flute player Magnus Lindgren, trombonist Karin Hammar and guitarist Max Schultz, but also an almost 30-strong orchestra. Together with the Dalasinfoniettan, one of the leading orchestras in Sweden, with a wealth of experience in many different styles, the music shines in symphonic splendour and is lent a colourful expressiveness. This represents the fulfilment of a heartfelt dream that Gustafsson has had for a long time.

And so it is that on “When You Make Me Smile”, orchestral vocal jazz resonates in a way that hasn’t been heard for many a while. Already the intro “Call Me Lonely”, with its hymnal sonority, is reminiscent of the era of sumptuously staged masters the likes of Paul Anka or even Blossom Dearie.

Gustafsson and her companions exploit every opportunity that the large scale offers:  from up-tempo numbers like “A Different Kind” and airy Burt Bacharach-like songs such as “If Dreams Are Made of Sand” to classical swing the likes of “Blind As A Bat”, light bossa like the title track and pithy organ-soaked soul numbers like “I Get Along” through to neo-blues like “Woke Up On Sunday” and touching melancholy ballads like “Stay, Stay, Valentines Day”. A vocal duet is also more or less a compulsory part of this programme: On “Let It Go” there is a surprising reunion with Eagle-Eye Cherry, the son of trumpeter Don Cherry, who grew up in Sweden and who now, after his worldwide successes like “Desireless” has gone back to reside in his homeland.

Although, indeed perhaps precisely because, Gustafsson quite openly continues on with tradition, “When You Make Me Smile” is perhaps her most personal album. She leaves her very own personal impression on all of the tracks, with her vocals and her radiating overall musical concept. Because together with her Swedish fellow man Ollie Olson Gustafsson not only wrote most of the songs, she produced the album as well. Interpreting major songs is an art, writing them is a gift, and it is one that Gustafsson is also endowed with.

”This is a dream come true. I started to write songs together with the lyricists Tomas Bäcklund and Ollie Olson about two years ago and contacted Dalasinfoniettan, an absolutely fantastic Swedish orchestra that I love, and have worked with several times earlier. For a short while I was thinking that there are already so much lovely music out there to record, but felt very fast that for me it’s natural to compose new material. It has been both a freedom and a challenge to have an orchestra available. Freedom, simply because a big orchestra gives so many possibilities, especially sound wise. Challenge, because I’m used to smaller constellations with another flexibility and different possibilities to improvise. In this case I had to decide carefully in advance how I wanted everything. It has at the same time been tremendously fun. The orchestra arrangements are written by Magnus Lindgren, Erik Arvinder and Calle Rasmusson, three favorite arrangers in the genre. This project has involved a lot of work, so the bigger are my happiness now when it’s done. I hope that everyone who listens will share my happiness” (Rigmor Gustafsson)

She has soul in her voice” (Nils Landgren about Rigmor Gustafsson)
Rigmor Gustafsson was born and grew up on a small farm in Värmland, in the very heart of Sweden. She picked up the guitar at age nine, and soon discovered her passion for jazz. It soon became clear that she wished to turn this passion into a career.

After her education at the Royal Academy of Music in Stockholm, she rapidly became known in Sweden as an excellent vocalist. She worked with various big bands, led her own small groups, performed on Swedish television and made numerous recordings for radio.

In 1993 she moved to New York to study at the New School and at Mannes College of Music and soon founded her first quintet, which also toured all over Europe. In 1996 Rigmor returned to Stockholm, was given a teaching position at the Royal Academy of Music and has since been regarded as a star of the young and lively Swedish jazz scene.

In 2002 Rigmor was a guest star on Nils Landgren’s highly successful album “Sentimental Journey” (ACT 9409-2) and in 2003 she presented her debut on ACT “I Will Wait For You” (ACT 9418-2), which established her firmly in the tradition of great Swedish jazz singers like Monica Zetterlund, Lill Lindfors, Sylvia Vrethammer or Alice Babs. I

“Will Wait For You” rocketed up to second place in the German jazz charts and No.1 in Sweden, where she took over from Norah Jones, who had held place for 74 weeks. The German Jazz Award and a Gold record in Sweden were tangible rewards for the success of this album produced by Nils Landgren.

The following year Gustafsson and the French-American pianist Jacky Terrasson released a moving and sensual tribute to one of the greatest singers of pop culture, Dionne Warwick: “Close To You” (ACT 9703-2). Rarely have pop songs looked so good in jazz clothes. The new arrangements fit the soul-classics like a glove. The songs retain their pop identity, yet they have become exciting contemporary jazz. Gustafsson was not only rewarded with the Swedish Jazz Award, she was named “Best singer of the year” by Werner Burkhardt in the end-of the-year review in the Süddeutsche Zeitung.

On her next album “On My Way to You” (ACT 9710-2), released in February 2006, Gustafsson interpreted Michel Legrand’s world famous melodies from films with great jazz feeling. Some of his songs like “Windmills of Your Mind", "Once upon a Summertime" or "You Must Believe in Spring", have become part of the world's musical heritage, and Gustafsson – directed by producer Landgren – proves to be the ideal voice for these songs. Michel Legrand himself admits: “I am honoured that Rigmor has chosen to do some of my songs. She knocks me out!” On My Way to You even placed Gustafsson 12th in the Swedish POP charts, and the album won a gold record in Sweden.

The following album ”Alone With You” (ACT 9717-2, released in fall 2007), her fourth release on ACT, ventures into uncharted (for Gustafsson) territory. Although she has been writing music and also lyrics herself for years, Gustafsson is more known to the public for her exceptional and empathic versions of other people’s songs. Now she has taken another step forward and put together a highly personal album comprised exclusively of her own songs.

In 2010 Rigmor recorded an incomparable album with the radio.string.quartet.vienna. “Calling You” (ACT 9722-2) is probably the only one among other song albums which unites vocals and strings in such a way as to form the “tapestry” of emotions found here. The tracks range from pop songs by Paul Simon and Stevie Wonder, to Burt Bacharach-classics, jazz standards and intricate rarities by Joni Mitchell and Richard Bona, as well as Swedish folk songs. This great musical richness is presented in the highly distinctive, sometimes warm, sometimes dynamic but always enjoyable style of the r.s.q.v., and carried by Gustafsson’s individual and moving voice.
After five albums in seven years with ACT it was time for something special: In 2011 Rigmor’s “Signature Edition” (ACT 6009-2) was released. This double-CD album contains a selection of songs from her last five albums as well as three previously unreleased songs. The range of her musical expressions is as broad as the range of human feelings itself: she sings blues and soul, several own compositions, enlightens sophisticated chansons, flirts with pop and classical music or improves with sparkling joy on catchy jazz pieces. Gustafsson loves to work with a host of very different musicians, for example with illustrious pianists Jacky Terrasson or Elise Einarsdotter; with the magical drummers Eric Harland or Wolfgang Haffner; with the genre-bending radio.string.quartet.vienna; and consistently with Nils Landgren, as a trombone player as well as a perfect matching singer.

“Her soul speaks to other souls”, Werner Burkhardt wrote about her performance at JazzBaltica a few years back. One is hard put to find better words for her voice and her personality.