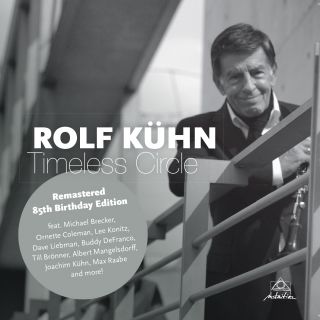 Catalog number: INT 34412
Releasedate: 01-10-14
More than one-quarter of a century of jazz history: When we now congratulate Rolf Kühn on this 85th birthday with a special release, we are paying special respect to the one of the few globally known and admired German jazz heroes. However, we are also paying our respects to a still active artist acting in line with his convictions and working with young musicians. To a personally reserved, always friendly and accommodating person despite all the fame that he has achieved. He has always been somebody who did not let himself be led astray from his path. Each time that he became curious faced with a new challenge, he took it on. This was regardless of whether he was playing alongside Benny Goodman, focusing on orchestra work and conducting, composing film and TV music, exploring the limits of free improvisation or taking excursions into jazz rock. On the other hand, his dedication to his instrument clarinet has remained constant. This was even against the spirit of the times, which did not want to take the clarinet as a jazz instrument seriously for many years. When the clarinet again became more popular in the 80s, Rolf Kühn had long since developed his own style and become a model for other musicians. The fact that the clarinet again as a solid place in jazz and a young generation of musicians is dedicating itself to this instrument (current example: Rebecca Trescher in the series "Jazz thing Next Generation") is certainly much to the credit of Rolf Kühn. Rolf Kühn has released records for numerous jazz labels since the 60s: Vanguard Records, Brunswick Records, Intercord, Impulse! and MPS. Most of them no longer are active. He recorded a number of CDs at Intuition during seven years (1994-2001). He has selected his 14 personal favorites from these recordings and remastered them with the renowned Klaus Scheuermann. As a result, the songs shine in a new radiance and provide us with special listening pleasure. Clear trebles, a denser atmosphere, substantially increased transparency: these are other reasons why it is worthwhile listening to this collection. Of course, another reason is because they provide a look into the sound cosmos of Rolf Kühn. Encounters with shining stars of jazz from his model Buddy DeFranco to Michael Brecker and Ornette Coleman, Albert Mangelsdorff and Lee Konitz, Chuck Loeb and Martial Solal and all the way to Peter Erskine, Wolfgang Haffner and many more. And of course especially important: with his 14-year younger brother and pianist Joachim Kühn, with whom—in addition to the family relations—he has a close relationship in music that repeatedly results in thrilling, joint concerts.