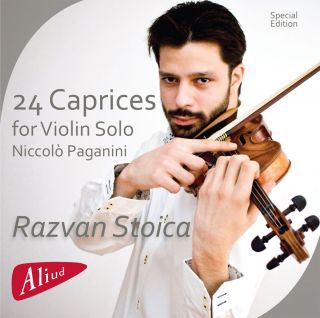 Catalog number: ACDBR 742
Releasedate: 12-09-14
Paganini’s 24 Caprices, a mile hill for any violin virtuoso. Paganini composed these solo works to play exclusively in his concerts, all of which profoundly influenced the evolution of violin technique. Generally speaking, Paganini’s compositions were technically imaginative, and the timbre of the instrument was greatly expanded as a result of these works. Sounds of different musical instruments and animals were often imitated. Like Caprice no.9 (Hunting) or no. 13 also known as “Devil’s Laugh”. Paganini was in possession of a number of fine string instruments. More legendary than these were the circumstances under which he obtained (and lost) some of them. While Paganini was still a teenager in Livorno, a wealthy businessman named Livron lent him a violin, made by the master luthier Giuseppe Guarneri, for a concert. Livron was so impressed with Paganini’s playing that he refused to take it back. This particular violin came to be known as Il Cannone Guarnerius. On a later occasion in Parma, he won another valuable violin (also by Guarneri) after a difficult sight-reading challenge from a man named Pasini. Playing and recording the 24 Caprices by Niccolo Paganini on my Stradivarius 1729 brings to this recording the original atmosphere that Paganini created in his concerts while playing these amazing extreme virtuoso works.

About Razvan Stoica
“Discerning charm and ravishing timbre, breathtaking technical bravura, sparkling intonation...”...he will become one of the greatest violinists of his generation.” “Meunsteriche Zeitung” Born in Romania, in June 1986, in a family of famous musicians of an undeniable quality and prestige, Razvan Friedmann Stoica enlightens the latest years with his virtuosity and passion, with his outstanding performances and presence on the well-known international stages! His charismatic performances have drawn the attention of both the press and the public. Having mastered his instrument at a young age, Razvan was admitted to the Enesco Conservatory in Bucharest in Maestro Modest Iftinchi's class. After graduating, Razvan continued his studies at the Royal Conservatory in Amsterdam, studying under Ilya Grubert. His talent and passionate interpretation brought him out into the light of the classical music world stage as being the real, well-known, appreciated, best new talent of 2013 as rewarded in Slovakia at the EURORADIO New Talent Competition in October 2013. Razvan Friedmann Stoica plays on an Antonius Stradivarius 1729 violin loaned to him by an anonymous donor from Salzburg and a violin bow of Max Moller, Amsterdam, courtesy of Montferland Cultuur Fonds. The suave delightful tone, the heavenly sound and the charismatic performance of the young violonist made the prestigious critics stand up for his presence in concerts and acclaim him to be: the greatest violonist of his generation!