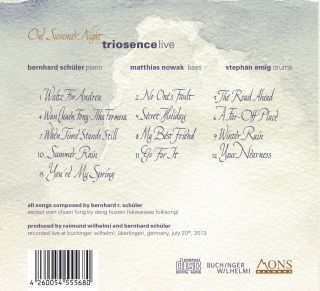 Catalog number: MR 874568
Releasedate: 24-10-14
Stern devoted a special report to the band, calling them "the new faces of German jazz" and giving their CDs the highest rating. In fact, triosence has been making an increasing splash in the trade press. "The new milestone in jazz trios", "an example of a musical trinity" and "in music, the sun’s rising for us in the west too". These and similar quotes are the reactions of well-known magazines to this exceptional jazz trio, containing Bernhard Schüler (p), Stephan Emig (dr) and Matthias Akeo Nowak (b). Since its founding in 1999, triosence can be proud of an impressive trophy cabinet, from first prize at 'Jugend jazzt' to various cultural and compositional awards, with a best new entry in the international jazz charts in Germany extending their portfolio. In their tour schedule, alongside concerts in Germany and tours in the USA, are trips to Japan, Taiwan, Malaysia, Spain, Turkey, Lebanon and Albania. The Taiwanese government also commissioned a work from the band for their centenary celebrations.

This adds up to an unshakeable testimony that triosence, with their stylistic range covering jazz, fusion, folk, pop and world music (defined by themselves as songjazz), excites both sworn connoisseurs as well as newcomers to jazz.

After five studio albums, triosence are now releasing One Summer Night on Mons Records. This live album is  very special, and that applies to the musical content as well as the origin of its production. Aside from the brand new composition 'The Road Ahead', the selection of tracks on One Summer Night contains a "best of" the previous triosence albums, yet it presents them in completely new and unheard arrangements. For example,  'Waltz For Andrea' appears as the title song on their debut CD First Enchantment in a dynamic 3/4 time, but here it is allowed to jump excitingly between a waltz and 4/4 time. 'You're My Spring' was formerly a "true" waltz on the album Away For A While, but is here shown in a completely new look in a rare 5/4 arrangement. Other pieces are in turn  reharmonized or contain completely new compositional sequences.

In general, triosence show with One Summer Night how exciting, energy-charged and downright electrifying a piano trio can sound; one that happily faces the challenges of further development and maturity, that understands the flow of change as a powerful opportunity, and that can take heart from it. A trio that takes and refines its opportunities, which this live recording made in a single summer night demonstrates. triosence pianist and composer Bernhard Schüler: "our friend and patron Raimund Wilhelmi set this unplanned live CD in motion. He invited us to play a concert for the 60th birthday of the Buchinger Wilhelmi fasting clinic in Überlingen on Lake Constance, one that he would like to record and use within the clinic. A very special relationship has developed between us over the years, ever since I first met him in 2008. I would even say that my concept of composing music and the philosophy of Buchinger Wilhelmi are very close; the  keyword is transformation. We assembled a "best of" programme together with Raimund, and then one thing just led into another. The wonderful location, the stage with its wide view over Lake Constance, the incredible audience and all the energy of this place just had us under its spell and inspired us. We've played one of the best concerts ever. It was magical... Added to that the quality of the recording was down to a T, and that was when our live album One Summer Night was born. Thank you Raimund for all your support!"

The album's artwork also deserves a special mention. The cover shows a watercolour by the Swedish painter Rainer Hoffmann, the pianist's uncle and artistic role model, who has also calligraphically written all of the song titles in the CD's artwork by hand