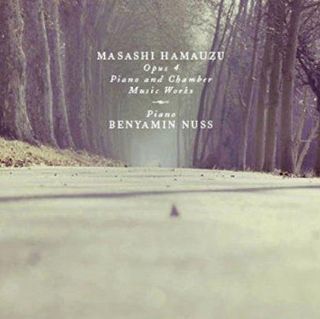 Catalog number: MR 874566
Releasedate: 21-11-14
Benyamin Nuss - The Pianist:
Born in 1989, Benyamin Nuss lives his passion for music. Inspired and encouraged by his father Ludwig Nuss and his uncle Hubert, both renowned jazz musicians and composers, Benyamin not only grew up within the tense area between classical music and jazz, but also completely turned the two genres into his passions.

Even as a ten-year-old, he began engaging himself with the works of Debussy and Ravel. It was above all the Impressionists who at first fascinated him with their tones and harmonies, then he found himself drawn more and more to the Romantics; Rachmaninoff, Liszt and Chopin are today among his favourite composers.

How deeply Benyamin internalized their music is also demonstrated by his first prizes at the national Jugend musiziert (Young Musicians) in the Steinway Competition (2005) and the international Prix d'Amadeo de Piano competition (2006), as well as a grant from the Hochbegabtenstiftung (Foundation for the Gifted) Best of NRW. Since 2008, he has studied at the Cologne/Aachen University of Music. His debut album Nuss plays Uematsu (2010, Deutsche Grammophon) contains video game music in a classical context and went straight into the classical charts. This was followed in 2012 by another solo album Exotica (Deutsche Grammophon), featuring works by Debussy, Balakirev, Milhaud, Villa-Lobos and Ginastera, as well as his own compositions. At home and abroad, Benyamin has performed as a soloist with several leading orchestras in Cologne, Stockholm, Tokyo, Chicago and London.

On this present production Masashi Hamauzu (Mons Records), he plays in a trio for the first time with Lisa Schumann (violin) and Kana Shirao (cello), as well as solo piano on the compositions of the Japanese Masashi Hamauzu. These two exceptional musicians are not only connected by a shared musical passion, but also by amazing biographical parallels.

Masashi Hamauzu - The Composer:
The Japanese Masashi Hamauzu is a composer of classical music. His work is inspired by Impressionists such as Debussy and Ravel, and yet at the same time he is compared to the works of "Les Six", a group of six French composers united in their reaction against romantic Impressionism, and who celebrated a change towards contemporary forms of popular music.
Caught between these stylistic divergences, Hamauzu has managed a remarkable career.

His musical repertoire encompasses both large orchestral works, and intimate chamber music concerts and compositions for solo piano, in equal measure. A completed course in vocal studies encouraged the widening of his views on structurally experimental possibilities, and enabled him to confidently transcend and expand the horizons of the classical music traditions.

After completing his studies, Masashi Hamauzu established his career as a staff composer at Square Enix, a leading developer of video games that included the Final Fantasy series. His dramatic compositional approach, coupled with his pioneering use of choral methods, modern harmonies and orchestration, let him break free from established forms and helped video game music attain an unprecedented level of status. With the soundtracks for Final Fantasy XIII, SaGa Frontier 2, Final Fantasy X, Unlimited Saga and Sigma Harmonics, to name just a few, he attracted worldwide attention and unreserved approval far beyond the boundaries of the game-playing community. His compositions are performed around the world in both a variety of orchestral settings and as solo piano concerts.

Masashi Hamauzu on his compositions:

Etude Op. 4
This etude comprises twelve individual pieces, of which three compositions had been completed and performed by Benyamin Nuss two years earlier. In 2013, when his Pianoschlacht Masashi Hamauzu concert in Tokyo was confirmed, I enjoyed the freedom of adding the nine remaining pieces, with all of their due complexity, and completing them on time. The insurmountable potential of Benyamins playing skills meets the fullness of my compositional desire - there is a true understanding of my musical intentions; he seems to breathe my music. We were able to discover some common elements in our histories, both personally and musically. And I also express this in Etude Op. 4 - none of the twelve pieces is dedicated to a specific topic, and yet in their harmony they follow a plan.

Atmosphäre Op. 1
For years, my daughter wished for a violin etude penned by me, but the time passed and nothing happened. Benyamin's concert, however, inspired me. I knew that his skills would give my composition the intensity I desired. The violinist is Lisa Schumann, and like Benyamin a graduate of the Cologne University of Music. When I heard her, I immediately knew why her sound would harmonize so perfectly with Benyamins playing and would interact perfectly with my compositions. Lisa's tone is elegant, mature and pure, without any elaborate or unnecessary frills. Atmosphäre Op. 1 consists of three pieces that do not follow their own theme, but rather their architecture seems to naturally unravel throughout the course of the composition. Only with the first of the three parts had I a clear direction of the development I wanted to follow; a warm, bittersweet essence amidst a white and hazy atmosphere...

Impromptu Furioso
The cellist is Kana Shirao, a graduate of the Cologne University of Music. As I heard her playing, I was caught by a spontaneous desire to write an etude. And I really wanted Benyamin, Lisa and Kana to record this piece and perform it in Japan as a trio.
These three passionate musicians give my composition truthfulness and beauty. To hear their sensitive interpretation of my Impromptu Furioso was one of the few moments in 42 years, in which I was allowed to feel myself as, not only a composer, but also an artist.

Frenzy Under Pressure
This piece is an expression of a deep inner turmoil, of a tumult, which plagued me when it first appeared in 2011. At that time, I had just started working as a freelance composer and musician, and aside from some commercial work, I hadn't written very much. Anyway, while I worked on this composition, I was overwhelmed by an immense joy in what I was doing, almost a feeling of pleasurable dependency - an addiction to composing. That's what I put down in notes.

Giant
This piece is from my band Imeruat and the original contains, among other things, vocals that declaim the German word for "Authority" in the style of a radio show. This trio arrangement is an exciting experiment, although it follows the structural principles of the original to the letter. And I'm sure there are many other ways to arrange and interpret this piece...

Elf
In German, the word "elf" has two meanings: it can mean the Elves from fairy-tales, and also the number eleven. That fascinated me.
This piece is an arrangement of a composition by my daughter Ayane, at the time only 11 years old, which I've re-arranged for this production. Both the melody and the harmony lines have remained the same, I have merely rewritten the piece as a piano solo. Admittedly, Elf is a very self-serving story, but I badly wanted to know how an "interplay" between Ayane and Benyamin would sound, as both had grown up with my music. I hope you enjoy this piece as much as I do; it represents me in a very personal way.

Missgestalt
I based this piece on video game music which I composed 15 years ago, and have now re- arranged. As Benyamin premiered it in this form at the Pianoschlacht Masashi Hamauzu Works, it was immediately clear to everyone that I must have composed it specifically for him... The opening sequence is markedly energetic, almost combative, and then it suddenly reshapes itself into something vibrant and intense. It conveys the sense of a battle against the dangerous unknown. Halfway through, the music takes a completely different turn and breaks up into gentle, almost faint sounds, as though one is reflecting upon the past fray; only to then soar again to its full power and magnitude.