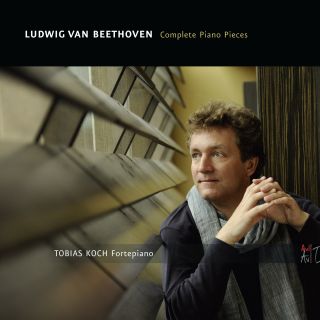 Catalog number: AVI 8553321
Releasedate: 07-11-14
On this CD, Tobias Koch embarks on a quest for sonorities and instrumental exploration.

On no less than five different historical fortepianos – all exquisitely preserved – he presents the full scope of the art of piano building as it was cultivated in Beethoven’s time. Koch uncovers a unique diversity ranging from the 13-year-old musician’s first attempts at composition to his very last musical thoughts. Meanwhile, the fortepianist also proves that world premiere recordings can still take place in the 21st century. Two pieces are now available for the first time in a performance on the exact instrument for which the composer wrote them: the orphica, a portable keyboard with a captivating, ‘far-off’ sound.

World Première included: First recordings on an ORPHICA, a kind of travel piano, which sounds like a Lute from Beethoven’s time, with original pieces composed for the ORPHICA.

This is the first solo orphica recording ever released and is a fascinating recording of this repertoire.

Tobias Koch’s musical credo is to trace the essence of sound
with the joy of discovery and open-minded versatility. One
of the most versatile and distinguished musicians of his
generation, he is fascinated by the expressive possibilities of
period keyboard instruments. Both unorthodox and spirited
in his performances, he plays the harpsichord, clavichord,
tangent piano, early fortepiano, orphica, organ, pianopédalier,
and romantic grand piano.
But still Tobias Koch tries to be a most unspecialised specialist,
constantly striving to lend the music he performs vivid colour
on the keyboard instruments best suited for the repertoire in
question. His performing career has taken him all over Europe.
He appears as a guest artist at leading festivals.
Tobias Koch has gained valuable artistic inspiration while
studying in master classes by David Levine, Roberto Szidon,
Walter Kamper, Claire Chevallier, and Jos van Immerseel.
Important musical partners include Andreas Staier, Gottfried
von der Goltz, Joshua Bell, Steven Isserlis, Markus Schäfer and
and Concerto Köln. He collaborates closely with instrument
makers, as well as major musical instruments museums. He
is on the faculty of the Robert Schumann Hochschule Düsseldorf.
In addition to more than 20 CD recordings of works
by Mozart, Beethoven, Mendelssohn, Burgmüller, Schumann,
Chopin, Liszt, Wagner, and Brahms, a wide range of publications
round out his work in the field of music. Drawn as
if by magic to the irresistible sound of period keyboard
instruments, Tobias Koch devotes himself to performing
exclusively on authentic period instruments.
www.tobiaskoch.eu