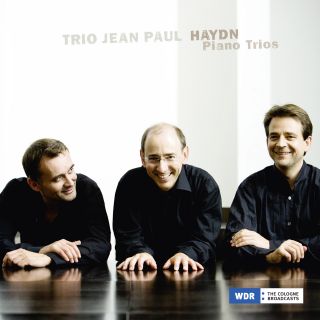 Catalog number: AVI 8553311
Releasedate: 13-02-15
HAYDN – Diabolus in Musica
C – D – E – F#. The keys of the four Haydn trios on this disc form an ascending progression corresponding to the tritone, regarded since the Middle Ages as the most dissonant interval of all. The octave, conversely, has been regarded since ancient times as a symbol of divine unity and purity. The tritone divides the octave into two exact halves, thus destroying that unity – which is why it is also known as the diabolus in musica. To call Haydn’s music “diabolic” would be stretching the analogy too far. Nonetheless, in its hovering, unstable quality requiring resolution in opposite directions, the tritone can illustrate one
of the most marked traits we find in this composer’s output. His music is known for its typical element of surprise: Haydn indeed managed to foil the well-educated expectations of 18th century audiences quite consistently. He must often have felt a quasi-diabolical pleasure in perturbing his listeners with different kinds of jolts, constantly varied and renewed. Even in the “pure” area of musical conversation – e.g. chamber music – Haydn stood apart from other composers thanks to his witty sense of humour, his knack for inserting the most fitting punchline at exactly the right moment. No other composer of Vienna Classicism possessed Haydn’s unique, infallible anticipation of what the listener’s emotional state would be like at any given moment, foiling expectations and bringing them out of balance with a decisive kick in the shins.

Trio Jean Paul
The Trio Jean Paul, founded in 1991, is one of today’s most distinguished chamber music ensembles and a
popular guest at the international concert venues. Among the highlights of the latest seasons were concerts
in Vienna, Berlin, Brussels, Bremen, London, Zurich and Hamburg as well as at the renowned Sociedad
Filarmónica in Bilbao, Gulbenkian Foundation in Lisbon and Liceo de Cámara in Madrid. Concerts in Los
Angeles, Vancouver, Quebec and Montreal marked their last tour of the US and Canada.
After First Prizes at the international competitions in Osaka (1993), Melbourne (1995), and at the German
Music Competition, an extensive concert career has developed which has led the ensemble on a regular
basis to major musical centers and tours to Australia, Japan, New Zealand, South-America, and the USA.
Master classes and performances at highly rated international festivals are par of their agenda. Regular
cooperation with musicians like Sharon Kam, Paul Meyer, Lars Anders Tomter and Vladimir Mendelssohn
adds to the multifarious artistic work of the Trio.
By naming their ensemble after the romantic author Jean Paul, the three musicians not only refer to their
special affinity for the works of Robert Schumann, but also to the fundamental artistic idea of making the
music’s speech-like and rhetorical elements to the point of departure for their interpretations, which
reflected in many recordings. An important area of the Trio’s work is therefore its occupation with the
contemporary repertoire as numerous world premieres by famous composers such as M.C. Redel, K.Y. Chong,
M. Denhoff, G. Kerry, V.D. Kirchner und A. Gürsching show. 2014 brought the highlight of the world première
of Wolfgang Rihm’s triple concerto, dedicated to Trio Jean Paul, at the Berliner Festwochen with Cologne
Radio Symphony Orchestra under Jukka-Pekka Sarastre.
www.triojeanpaul.com