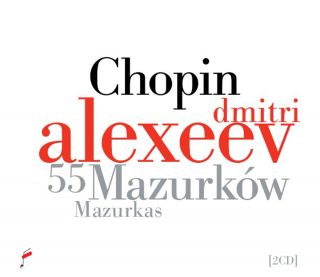 Catalog number: NIFCCD 204
Releasedate: 23-01-15
The first recording of the complete mazurkas of Fryderyk Chopin made by one of the most outstanding Russian pianists, a juror of the forthcoming Chopin Competition.  This album is released in the Institute’s ‘White Series’ of recordings, which, like ‘The Real Chopin’, is planned as a complete set of recordings of the entire oeuvre of Fryderyk Chopin, but performed on contemporary, rather than historical, instruments. Dmitri Alexeev piano
Recorded in the Witold Lutosławski Concert Studio of Polish Radio, Warsaw, 21–24 April and 22–25 July 2013
2014, Narodowy Instytut Fryderyka Chopina/The Fryderyk Chopin Institute