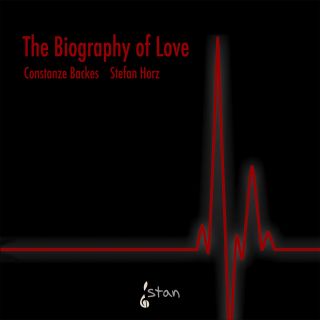 The Biography of Love

Catalog number: STAN 003
Releasedate: 03-04-15
• A broad spectrum of musical styles – the ability to reach a wider group of listeners.
• Exclusively natural acoustic – without addition of artificial reverberation.
• Constanze Backes and Stefan Horz present this highly demanding program in a natural and relaxed manner, which makes the music easily accessible
• Dynamic interplay of different genres makes for interesting and exciting listening.

Love Songs from 600 Years
With a marvellous selection of love songs from six different centuries, Constanze Backes and Stefan Horz have successfully demonstrated the universality of this strongest of all emotions. Regardless of time or place of origin all of these songs take hold of us instantaneously, and invite us to journey to the innermost core of our soul.

The musicians have known each other for some time and have a working relationship spanning many years, and with the creation of this program they have fulfilled a heartfelt wish. Over the course of numerous performances „The Biography of Love“ has been refined and polished, and in June of 2014 Constanze Backes und Stefan Horz were ready to take the plunge and record the program.

The musicians view this program as an opportunity to share their own journey with the listener, together letting go of the here-and-now via the universal language of music and the universal emotion Love, expressed in different genres which retain their validity regardless of fashion or convention.

Constanze Backes was born in Bochum and studied in Essen, Germany, and London. After having been nominated by Sir John Eliot Gardiner, she won the London Lady Nixon Award  in 1993 and has been working  on the European Early Music scene ever since. Among the highlights of her career are Bach’s Cantata 51 with Nicholas McGegan at the Göttingen Händel Festival, Bach’s Mass in B minor with Thomas Hengelbrock in Baden-Baden and operatic roles such as Barbarina (Figaro), Papagena (Magic Flute) and Valletto (Poppea) with Gardiner for Deutsche Grammophon records in international productions, performing in Lisbon, London, Amsterdam, Paris and Parma. She also was a long-term member of the Monteverdi Choir.
The last few years saw her recording works by Händel’s teacher Friedrich Wilhelm Zachow with Ludger Rémy, performing cantatas by Steffani at the Göttingen Händel Festival as well as Monteverdi’s 1610 vespers in York, Aranjuez, Santiago de Compostela, Rome and Lisbon. She sang solo concerts for the WDR radio station in Cologne and embarked upon several projects with the jazz ensemble „Between the Times“ (a recording of works by Monteverdi is soon to be released). In 2012, she premièred the re-discovered opera „Il Marito Indolente“ at the Regensburg Early Music Festival, singing the female lead role. 2014, she sang in Händel’s „Solomon“ at the Halle Händel festival.
In addition to that, she translated several theatrical and literary works auch as Britten’s „Turn of the Screw“ (Darmstadt opera house). Constanze is a mother of four, teaches at the Wuppertal boys’ choir, sang in the popular „Ritter Rost“ children’s audiobook series and works for the Düsseldorf „Singpause“, a project designed to teach singing to a wide number of schoolchildren.

Stefan Horz was born into a musical family and first practised his musical skills by improvising. He studied  sacred music at the Cologne Musikhochschule and, after his A exam, took up his post-graduate studies with organ professor Wolfgang Zerer at Hamburg Musikhochschule. Stefan Horz then studied the harpsichord with Ketil Haugsand in Cologne, finishing with a „cum laude“ degree.
He also attended several masterclasses with Bob van Asperen, Glenn Wilson, Harald Vogel and Michael Radulescu.
Stefan Horz has been a member of numerous Early Music orchestras such as Concerto Köln and the Neue Düsseldorfer Hofmusik. As a soloist or with his own ensembles, he has performed at the Göttingen Händel Festival, the Styriarte Festival in Graz, the Rheingau Festival and the Alte Oper concert hall in Frankfurt.
In 1998, Stefan Horz succeeded the organist Johannes Geffert at the Kreuzkirche in Bonn.
Stefan Horz has specialized in concert programmes that focus upon the major Bach cycles such as the complete suites and partitas from the „Wohltemperiertes Klavier“, the harpsichord and instrumental sonatas or the third part of the „Clavierübung“. He regularly performs the organ and orchestra concertos by Rheinberger and Poulenc, while his personal speciality is to play transcribed extracts from Wagner operas such as „Parsifal“ and „Tristan und Isolde“.