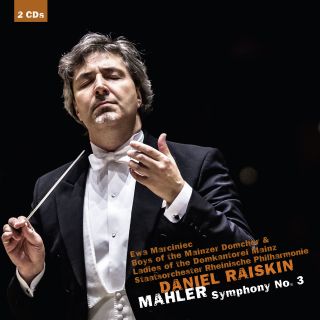 - First Mahler Symphony using a choir
- Raiskin & his Koblenz Orchestra are counted as one of the Top German orchestras
- Major Success with the Shostakovich Symphony No. 5 recording
- Outstanding sound

The composer who dared such open rivalry with God himself was also a brilliant conductor. “Architecture is music in space, as it were a frozen music,” Schelling once wrote, and Mahler applied this in his conducting style: music is architecture transposed into the dimension of time- moving, flowing architecture. Instead of merely tracing the outlines of fellow-artists’ musical blueprints with a schoolboyish hand, Mahler built forms based on the drawings of great musical architects. To Mahler, the actual process of constructing a musical form- its deployment along the axis of time- was infinitely more important than the ultimate goal, a perfectly formed crystal. Daniel Raiskin takes on Mahler’s third symphony, putting into practice this same idea of acting as a musical architect, a master builder who immediately brings his construction project into fruition in the concert hall.
EWA MARCINIEC studied composition, music theory, voice and acting in n the class of Zofia Janukowicz-Poblocka at Gdansk Music Academy, where she obtained her diploma with distinction in 1992. She pursued graduate studies at Stuttgart Music Academy with Prof. Luisa Bosabalian and attended masterclasses imparted
by Carlo Bergonzi, Paul Esswood, Helmuth Rilling and Adele Stoltem, concluding her studies in 1996.
At the Polish Artsong Competition in Warsaw she won First Prize along with two special prizes awarded by Krystyna Szostek-Radkowa for the best interpretation and the most beautiful voice. She also reached the finals at the Hertogenbosch International Vocal Competition and the ARD Competition in Munich. Her repertoire extends from the Baroque age to contemporary music.
Ewa Marciniec’s engagements lead her to travel widely, appearing at important European festivals and in well-known concert halls, and collaborating with reputed conductors such as Frans Brüggen, Myung-Whun Chung, Danielle Gatti, Christopher Hogwood, Toshiyuki Kamioka, Jacek Kaspszyk, Jerzy Katlewicz, Kazimierz
Kord, Jan Krenz and Jun Märkl. She has shared the stage with luminaries such as Susan Anthony, Eva-Maria
Bundschuh, Albert Dohmen, Zdzislawa Donat, Simon Estes and Sabine Hass.
Currently counting over 100 singers among its ranks, the Mainz Cathedral mixed choir

DOMKANTOREI
ST. MARTIN was founded in 1987 by Prof. Mathias Breitschaft, its former conductor. Many well-known orchestra conductors have engaged the choir for performances and recordings in view of its homogeneous timbre and its high degree of musical flexibility. Thus the St. Martin Domkantorei has collaborated with musicians such as Riccardo Chailly, the late Giuseppe Sinopoli, the late David Shallon, Louis Langrée and
others – appearing with the Bonn Beethoven Orchestra, the Staatsphilharmonie Rheinland-Pfalz, the State Orchestra Rheinische Philharmonie Koblenz, Dresden Staatskapelle, Jerusalem Symphony Orchestra and the Deutsche Kammerphilharmonie in Bremen. The choir’s new conductor since August 2012 is Mainz Cathedral Director of Music Karsten Storck.
The Mainz Cathedral men’s and boys’ choir MAINZER DOMCHOR comprises a total of 140 members ages 8 to 24 who sing in its different formations. The choir has been performing in Cathedral masses every Sunday
and church holiday ever since 1866, when it was founded by Bishop Emanuel von Ketteler. Moreover, in the course of the last 25 years, the choir has become quite well-known; its concert engagements have thus been steadily multiplying, and the formation has travelled to perform worldwide, including frequent appearances in German cathedrals and concert halls. The choir does not have its own boarding school; instead, its members meet three times a week in the Cathedral Choir House in order to rehearse great choral repertoire on the basis of extended choral and solo vocal training. Karsten Storck is the choir's artistic director.
Few orchestras can look back on a history as long as that of the RHEINISCHE PHILHARMONIE STATE ORCHESTRA. Its roots go back to 1654, the year when the Prince Bishop‘s Court Orchestra was founded in
Koblenz. In 1973, the State took up the orchestra’s financing in order to ensure long-term enrichment of musical life in the Rhineland-Palatinate. The Rheinische Philharmonie not only offers over sixty orchestra concerts each year, but also plays for ca. 140 annual opera stagings at Koblenz Municipal Theatre, thus fulfilling an essential role in the cultural and social life of the Rhineland Palatinate. The orchestra reinforces
its excellent reputation on tours in Germany and abroad, by participating in international festivals and through a series of recordings for radio and CD. It is thus offered a warm welcome in the great concert halls of Germany and Europe – in venues such as the Concertgebouw in Amsterdam and the Grosses Festspielhaus in Salzburg.
These outstanding results are due, last not least, to the constant dedication of Daniel Raiskin. Ever since his appointment as Chief Conductor in 2005, Raiskin has been making clear, decisive moves in favour of ongoing artistic evolution by forming the orchestra’s own unique, individual profile. The Rheinische Philharmonie State Orchestra collaborates on a regular basis with such internationally renowned artists as Julian Rachlin, Daniel Müller-Schott and Benjamin Schmid.

DANIEL RAISKIN Conductor
Daniel Raiskin became quickly recognized as one of the most versatile conductors of the younger generation. He cultivates a broad repertoire, often looks beyond the mainstream in his strikingly conceived programmes. A son of a prominent musicologist, Daniel Raiskin grew up in St. Petersburg. He attended music school from
the age of six and went on to the celebrated conservatory in his native city, where he studied viola and conducting. Inspired to take up the baton by an encounter with the distinguished teacher Lev Savich, he chose to make a gradual transition into a conducting career. At the age of twenty, Daniel Raiskin left the Soviet Union to continue his studies in Amsterdam and Freiburg, and was soon in demand as one of Europe’s
leading viola players, both as a soloist and chamber musician. He also took classes with maestri such as Mariss Jansons, Neeme Järvi, Milan Horvat, Woldemar Nelson and Jorma Panula.
Since 2005, Daniel Raiskin has been the Chief Conductor of the Staatsorchester Rheinische Philharmonie in Koblenz, and since 2008 has held the same title with the “Artur Rubinstein” Philharmonic Orchestra in the Polish city of Lodz. His regular guest engagements across Europe and Asia include working with first rate Orchestras in Belgrad, Copenhagen, Düsseldorf, Buenos Aires, Jena, Hong Kong, Krakow, Malmö, Salzburg, Taiwan, Hannover, Porto, Lyon, Marseille, México, Mainz etc.
Among the major soloists with whom Daniel Raiskin has appeared are Martin Fröst, Alban Gerhardt, Natalia Gutman, Gerhard Oppitz, Janine Jansen, Kari Kriikku, Lang Lang, Francois Leleux, Alexei Lubimov, Mischa Maisky, Midori, Shlomo Mintz, Daniel Müller-Schott, Steven Osborne, Enrico Pace, Ivo Pogorelich, Julian Rachlin, Vadim Repin, Benjamin Schmid, Dmitri Sitkovetsky, Julian Steckel and Alexei Volodin.
Recent recordings include the entire Brahms symphonies for the label TwoPianists and Shostakovich Symphony No. 4 for the label CAvi-music, both to great critical acclaim. His recording of cello concertos by Korngold, Bloch and Goldschmidt with Julian Steckel for the label CAvi-music received an ECHO Klassik Award in 2012.
„Daniel Raiskin is clearly a musician of sensibility, well versed in his craft; a further example perhaps of one last great gift of the old Soviet Union, the rigour and distinction of its conducting schools.” (Gramophone, 2/2012)