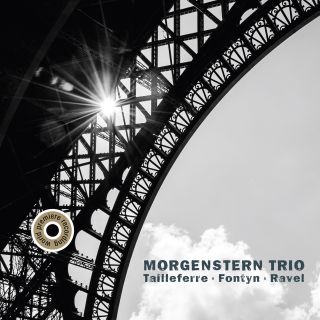 Catalog number: AVI 8553315
Releasedate: 10-04-15
-          The Morgenstern Trio gave a smashing debut Thursday evening at the Kennedy Centre’s Terrace Theatre. In works by Ravel, Bernstein and Brahms, the group displayed an unanimity, polished technique and musical imagination that I thought had vanished from the scene with the demise of the Beaux Arts Trio.”(Washington Post, May 2012)
Named after the German poet Christian Morgenstern, the Franco-German “Morgenstern Trio” has selected a “triad” of Franco-Belgian composers for their new CD, centered around Ravel’s Piano Trio in A Minor (1914). Violinist, pianist and teacher Kolja Lessing, a friend of the trio, drew their attention to the two relatively unknown works by Germaine Tailleferre (1892-1983) and Jacqueline Fontyn (born in 1930). For the three trio members, the main point of interest lay not so much in certain traits of style
or character these three Franco-Belgian works might eventually share, nor in the fact that two of the composers are women. Instead, their goal was to explore aspects of historical context and mutual influence among composers. “Ravel wrote his trio in 1914, and Tailleferre the first version of her trio two years later. We thought it would be particularly worthwhile to find out how two French-speaking composers, both known to be admirers of Ravel, wrote in this genre. Did they willingly succumb to his
musical influence, or did they distance themselves from their model? We were especially thrilled to have the opportunity to visit Madame Fontyn in her home in Brussels, and to talk with her about her trio.” In the Piano Trio, her last major work, Tailleferre summed up more than sixty years of active musical experience. She started composing the trio in 1916 but was interrupted by the troubles of the First World War. She only resumed work on it in 1978, thanks to a commission from the French Ministry of
Culture. Despite such an incredibly extended period of gestation, there are no pronounced breaches of style within the work – in accordance with Tailleferre’s view that music should only express “one’s own personality” instead of attempting to “translate an epoch”. The Morgenstern Trio certainly adopted her philosophy when they decided to approach the work intuitively. “The piece’s beauty inspired us. As we worked on it, we saw pictures in our minds that stirred our imagination. Of course we also researched on the work’s background, and the great flowering of the arts in the Paris melting pot of the 1920’s must certainly have helped kindle Tailleferre’s creativity!” “Ravel’s thinking was more orchestral, and the range of instrumental colors in his trio is remarkable. Tailleferre, on the other hand, followed the aesthetic of nouvelle simplicité: her style is leaner, more intimate, while still achieving the same level of intensity” (Morgenstern Trio). One is immediately struck by the uniqueness of Tailleferre’s music, probably due to the blending and assimilation of many different schools of new music in her time. The members of the Morgenstern Trio are fascinated by this work’s “mixture of styles” and “contrasts between movements”. As they see it, the first movement has something Impressionist about it, the second is reminiscent of Stravinsky, and the third is “particularly gorgeous thanks to its nostalgic mood”. And “the energetic onset of the fourth movement” reminds them of the
beginning of Ravel’s Piano Concerto in G Major. A certain confrontation between the Classical tradition and different currents of modernism can be noted in all three works featured on this CD. It plays as large a role for Ravel as it does for Belgian composer Jacqueline Fontyn, who wrote her early piano trio just after she finished her studies. “I resorted one last time”, Fontyn recalls, “to the Classical forms in which I had been well-grounded through my training with Marcel Quinet. I wrote this work two years after my next teacher, Max Deutsch, had already introduced me to the Schoenberg school.” Fontyn reflects about the four movements in her piano trio: “The form of musical expression chosen here is based on twelve-tone rows, handled in a free manner that occasionally lets a feeling of tonality shine through. The listener will easily note that the first movement is in sonata form, and that the second, lento, has an ABA structure. The third movement, scherzo, is a four-part fugue that goes strictly by the rules. The theme is made up of 12 notes leading to a climax on a 13th note, which serves as a point of departure for the countersubject. After the exposition we hear divertimentolike episodes, an ostinato on the dominant and a series of stretti; all of these sound cheerful and light. Following the Classical scheme, the finale is in rondo form.”
A certain tendency towards Classicisme can be noted in Ravel’s Trio: thoroughly concise structure, a recourse to traditional models such as passacaglia (3rd movement) and a predominantly tonal bent. At the same time, Ravel adopts some of Stravinsky’s refined rhythmic ideas and a series of exotic influences. The 2nd movement is based on the Malaysian poetry form Pantoum, and the beginning of the 4th movement seems to be heavily inspired by timbres of Asian instruments such as those featured at the Paris World’s Fair. “Throughout the entire trio, any admirer of Ravel’s orchestration can easily imagine
hearing other instruments”, as the members of the Morgenstern Trio point out. “It’s simply one of the most complex piano trios ever written!”


The Morgenstern Trio gave a smashing debut Thursday evening at the Kennedy Centre’s Terrace Theatre.
In works by Ravel, Bernstein and Brahms, the group displayed an unanimity, polished technique and
musical imagination that I thought had vanished from the scene with the demise of the Beaux Arts Trio.
Washington Post May 2012
For its first-rate standards of musicianship and technique, the Morgenstern Trio garners praise from
music-lovers and critics alike. The three members work closely together on each interpretation over an
extended period of time, devoting the greatest care to the most delicate nuance. Audiences are even
more thrilled to observe their obvious pleasure in shared musical expression, their palpable curiosity
and their sheer joy in making music together.
Perhaps more than any other musical genre, the piano trio pairs quasi-symphonic density and power
with the intimate, transparent texture of a solo recital. Piano trio performers thus face the challenge of
bringing these fascinating opposites together by creating a truly homogeneous ensemble sound. The
Morgenstern Trio, having applied a rigorous yet creative approach to piano trio repertoire over the
years, comes impressively close to that ideal.
Condecorated with the most prestigious prizes and awards (Vienna, Melbourne, ARD, KLRITA), the
Morgenstern Trio is at home on the major concert podiums of the world, including Carnegie Hall,
Kennedy Center, Vienna Musikverein and Konzerthaus, Amsterdam Concertgebouw and the
Philharmonies of Essen, Cologne and Berlin.
However, friends of the trio know quite well that some of the group’s greatest moments often emerge
in the smallest venues – in a true sense, chamber music.
www.morgensterntrio.com