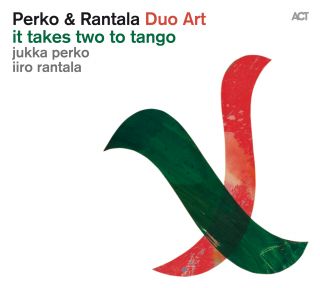 It Takes Two To Tango

Catalog number: ACT 96292
Releasedate: 08-05-15
- Finnish jazz
- Jukka Perko / alto & soprano saxophones and Iiro Rantala / piano
- “It Takes Two To Tango” is the first joint recording of the two, in a lyrically dense discourse on the topic of love in all its facets. It is an homage to their musical homeland and the uniting power of jazz.

With only five and a half million inhabitants in an area as big as Germany, Finland is one of the most sparsely populated countries in Europe. At the same time, the Finns are at the forefront of many fields - be it education, design or technology - and a good number of their European neighbours regard the North with some envy. The signs are pointing to a bright future for Finnish jazz as well: alongside pianist Iiro Rantala, Jukka Perko is considered to be one of the most important ambassadors of Finnish jazz. Born in 1968, he was hired to the “Dizzy Gillespie 70th anniversary big band” at the tender age of 20, with which he toured intensively through Europe and the USA before collaborating with legends of Bebop and Hardbop such as Red Rodney and McCoy Tyner and Scandinavian icons like Niels-Henning Ørsted Pedersen. Like Rantala, Perko also has roots in occidental artistic music as well as in jazz, and he plays regularly with classical orchestras. These two aspects - the American jazz roots and the European classic and folklore – are reflected to this day in his music and compositions. "It Takes Two To Tango" focusses a central musical point of reference in Perko and Rantala’s musical language: the tango. It may come as a surprise to some, but Finland is second only to Argentina on the list of countries where the tango plays a big part in popular culture. Indeed, the tango may be even more important to Finland because it is not considered a musical performance there like in South America, but a dance music for everyday use. The tango, alongside the Humppa and Jenkka, has been ubiquitous in public Finnish life since the first wave of European immigrants entered the country just before World War I. This was then intensified by the nation's state of mind in the fight for independence from Russia and the Soviet Union, and can now be heard played in restaurants, on ferries, at village summer festivals or as wedding music. Of course, they do embellish it in that uniquely idiosyncratic Finnish manner, adding German marching music and Slavic romanticism into the mix, which sees its played in a minor key, unlike most Tango Argentino pieces. With that age old saying “it takes two to tango” in mind, the two commence their dance with power and tempo on the heavily syncopated "So Beautiful Is My Darling", before finding their way to the classical tango rhythm on "Jealousy" and remaining closely entwined and "entangoed" in the lyrical-poetic dialogue that follows – the Charles Aznavour chanson "For Mama", the Victor Young version of the standard "Stella By Starlight", their own compositions and even a composition by their compatriot Sibelius, "Finlandia". Rantala is always surprising, exciting and lively and yet here also highly supportive to Jukka Perko, with his unmistakable lyricism, elegant to the very highest note, in which the strength of bebop is just as evident as Nordic melancholia and of course the passion of the tango. Once again Finland is the first on the floor and leaving footsteps. “It Takes Two To Tango” is the first joint recording of the two, in a lyrically dense discourse on the topic of love in all its facets. It is an homage to their musical homeland and the uniting power of jazz.