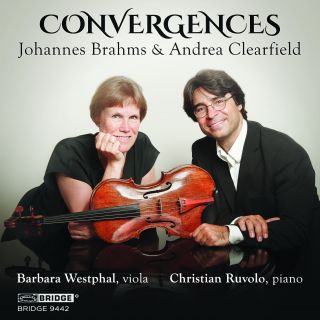 Ms. Westphal won the only prize for solo viola in the 1983 Munich Competition, as well as the prestigious Busch Prize the same year. From 1978 to 1985, Ms. Westphal was the violist of the highly acclaimed Delos String Quartet, First Prize Winner at the 1981 International String Quartet Competition in Colmar, France. In addition to numerous international tours with the Quartet, she recorded extensively with the ensemble both on radio and disc. Her own recordings on the Bridge label include the Brahms Viola Sonatas (with Ursula Oppens), the Reger Viola Sonatas and a recital program of works by Rebecca Clarke, Henri Vieuxtemps and Georges Enesco (both with Jeffrey Swann) and the six Solo Suites by J.S. Bach. Fanfare magazine said of the Brahms CD: “This recording absolutely outshines any others that are currently available and, to me, seems worthy of comparison with the legendary Primrose. For fans of a deep viola sound full of character it is absolutely unique.” Her most recent CD, on the Centaur label, features Brazilian Music for Viola and Piano with Christian Ruvolo.

In 1997 Ms. Westphal founded the Trio da Salò with violinist Ani Kavafian and cellist Gustav Rivinius which immediately celebrated major successes at the Schleswig-Holstein Music Festival. The Trio’s first CD, featuring works by Mozart and Beethoven, was recently released on the Kleos Classics label. She is also a founding member of the Bartholdy Quintet.

Barbara Westphal studied in London and New York and took her concert examination under Itzhak Perlman and Michael Tree (Guarneri Quartet). Since 1989 she has held a professorship at the Lübeck College of Music in Germany. She is a much sought-after teacher whose students are engaged with top orchestras in Germany and abroad, and several of her students have won awards at international competitions. Ms. Westphal regularly presents master classes in Europe and the United States and serves as a judge at major competitions.