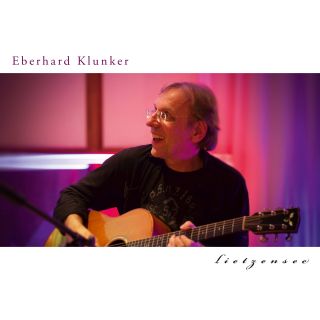 Catalog number: MR 874577
Releasedate: 17-04-15
- Eberhard Klunker is heralded as a master guitarist and a virtuoso of improvisation.

- Eberhard Klunker, who over the course of his musical development has devoted himself completely to the acoustic guitar, also found in West Berlin the challenge and inspiration for his latest solo album Lietzensee.

- "Looking for a good sounding room for the recordings, I found the Kirche am Lietzensee (Church on Lietzen Lake) in 2013. My goal was to record the guitar sound very naturally. Two microphones recorded the guitar sound directly, and were also attuned to pick up the ambient sound as well" said Klunker about this production.


Eberhard Klunker is heralded as a master guitarist and a virtuoso of improvisation. Highly respected by his audience and in professional circles, the musician can look back on a career and life story that is as unconventional as it is remarkable. What sets him apart, besides his musical virtuosity, is his ability to keep looking forward. Even today, he gazes with curiosity towards the future.
Born in 1952 in Herzberg, Klunker was initially self-taught and in 1971, then barely nineteen, he replaced the guitarist Hansi Biebl in the Modern Soul Band. In addition to that, he earned his certification as a professional musician from the Friedrichshain School of Music, something much coveted in the former East Germany. Through the Modern Soul Band he got to know Klaus Lenz, and with Lenz's big band, in which the singers Veronika Fischer, Christiane Ufholz, Uschi Brüning and Klaus Nowodworski were involved, took part in numerous tours within the GDR. In 1974, he joined the Hansi Biebl Blues Band, with whom he recorded the LP Savannah in 1975. He belonged to the elite of the East German rock, jazz and fusion scene, where he played with the likes of Ernst-Ludwig Petrowski, Conny Bauer and Ulli Gumpert. His musical star was shining bright and his path seemed clearly marked...
But Eberhard Klunker wanted something else from life. In early September 1975, together with his friend Olaf Wegener, a drummer and guitarist who also played in the Hansi Biebl Blues Band, he made a spectacular escape from East Germany. As night fell, they rowed a rubber dinghy from Poel Island to the Bay of Lübeck, where they landed on shore the next day near Dahme; a journey of sixteen hours. The 23-year-old then began his life and musical career all over again in West Berlin, which has been his home ever since.
Here he founded the band Windminister with fellow ex-GDR musicians. He recorded in the RIAS studios (with Klaus Renft, Christiane Ufholz, Klaus Lenz and Pete Wyoming Bender) among others, and later met blues greats like Chris Farlowe and Alexis Corner. He returned to his musical roots in 2010, when he recorded Live 2010 with his long- time collaborator Christiane Ufholz, an album which was nominated for the "Deutschen Schallplattenpreis" (German Record Critics' Award).
Eberhard Klunker, who over the course of his musical development has devoted himself completely to the acoustic guitar, also found in West Berlin the challenge and inspiration for his latest solo album Lietzensee.
"Looking for a good sounding room for the recordings, I found the Kirche am Lietzensee (Church on Lietzen Lake) in 2013. My goal was to record the guitar sound very naturally. Two microphones recorded the guitar sound directly, and were also attuned to pick up the ambient sound as well" said Klunker about this production." In my music, improvisation plays a very important role. Some pieces are completely improvised without any guidelines. And others develop their form around a theme and from a spontaneous situation. Each piece is unrepeatable in its arrangement" he added.
If you ask Eberhard Klunker after the intent and musical background of the compositions on Lietzensee, you will quickly realize that the one is dependent on the other. The individual pieces emerge from one another, and as much as they are capable of standing alone, they are all sensitively interconnected with each another. Using solo guitar with sparingly and selectively applied scat singing, he sketches true soundscapes. From the audible essence of delicate and gossamer-like sounds to up- tempo percussive numbers, they all develop three-dimensionally. In the first piece, he includes the Lietzensee church bells ringing for six o'clock. He even gives the ringing bells the main role in this aural landscape by improvising freely and swinging his guitar through the air to strengthen the effect. A more beautiful "acoustic portrait" of a recording space doesn't exist!
Eberhard Klunker is a visionary at home in many musical genres. A man and a musician who does not baulk at infringements, and who always remains true to himself and his instrument. A man who sensitively yet challengingly creates new worlds with his compositions and improvisations on the guitar, and who reconnects those worlds which already exist.
One who gives his sounds the freedom which he as a young man and musician dared to attain.
Clunkers is autodidact en 1971 - met slechts 19 jaar - aanhangers van de gitarist Hansi Biebl in de Modern Soul Band. Parallel, verdiende hij een professioneel certificaat als professioneel muzikant in de muziekschool Friedrichshain. Door de Modern Soul Band, ontmoette hij Klaus Lenz weten en ging door met zijn big band toerde door de DDR, waar de zangers Veronika Fischer , Christiane Ufholz en Uschi Brüning en de zanger Klaus Nowodworski deelgenomen. Een korte tijd dat hij met was Theo Schumann bezig en vervolgens verplaatst 1974 Hansi Biebl Blues Band, met wie hij 1975 LP Savannah opgenomen.
In het begin van september 1975, ondernam hij met zijn vriend, drummer en gitarist Olaf Wegener, ook voor Hansi Biebl Blues Band is één, een spectaculaire ontsnapping uit Oost-Duitsland. Zowel geroeid op de avond van het eiland Poel met een boot naar de baai van Lübeck , waar ze in de buurt van de volgende dag Dahme ging weer aan de wal. Ze hadden de afstand van ongeveer 40 kilometer, totaal 16 uur.
Eberhard Clunkers nam toen in West-Berlijn woont, waar hij leiding gaf aan de band met andere Oost-Duitse vluchtelingen Wind ministers stichtten hun eerste verschijning op 12 januari 1980 op Quartier Latin in de Potsdamer Straße 96, afgestudeerd. Hij woont nu in Berlijn-Marie Felde en komt meestal met akoestische gitaar, vaak solo.