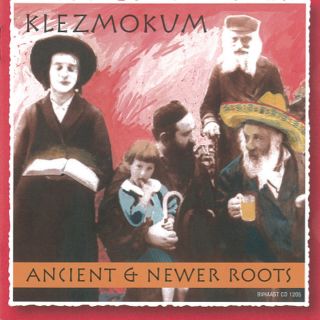 This is the 2nd in a series of modern arrangements and extended compositions based on works of Jewish composers who have been active since the last world war until the present time. This is poignant, often little known music deserving of much greater hearing. Special guests featured on the CD with our usual Klezmokum musicians are the muti talented Marek Balata (Krakow, Poland) vocals, vocalist Sovali (Sofie van Lier--Amsterdam), Syl Röllig (Cologne, Germany), vocals, and once more our great, guest clarinetist, Perry Robinson (USA). The CD includes works by Mikhail Gelbart, Beyle Schaechter Gottesman, Matt Darriau, Bill Averbach, and a Chabad Liturgical song “Ata Hivdalta”.

Burton Greene was born in Chicago, Illinois, and came out of the Russian and Roumanian Jewish lineage. He had seven years of classical music training with Isador Buchalter of the Fine Arts Building and studied jazz theory and harmony with Dick Marx. In 1962 he formed probably the first spontaneous composition group with bassist Alan Silva: The Free Form Improvisation Ensemble. His free style has made him well known and has led him to create many compositions. He joined the Jazz Composers Guild, and formed his first recorded quartet in 1965 which included Marion Brown and Henry Grimes. He performed in the 60’s with great avant garde jazz artists such as Alan Silva, Sam Rivers, Rashied Ali, Byard Lancaster, Albert Ayler, Gato Barbieri, etc. Burton was involved with the New Music Concert Series in Town Hall and YMHA organized by Max Pollikoff. Since Burton moved to Europe in 1969, he has toured and recorded extensively in both Western and Eastern Europe as well as the USA. In 1989 he formed the group Klezmokum dedicated to extending the tradition of East European and Middle Eastern Klezmer and Sephardic music. This is probably the first group dedicated to the fusion of Jewish music with contemporary jazz.