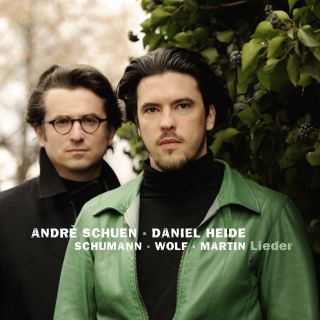 Catalog number: AVI 8553330
Releasedate: 05-06-15
Baritone Andre Schuen and pianist Daniel Heide were brought together through serendipity. They both took part in the 2008 Salzburg Mozarteum Summer Academy and performed during the prizewinners’ recital When Daniel heard Andre’s voice for the first time, he immediately knew he wanted to collaborate with the spectacular musician. This is the duo’s debut release, and the purpose is to present the entire scope of their repertoire. Andre Schuen has been exploring different facets of his voice. “The three personalities we encounter on this CD represent three different generations. In Robert Schumann we meet the enraptured youthful lover; in Frank Martin we meet a man caught in the midst of life but pushed to the brink of despair by fear of death. And Hugo Wolf draws our gaze to Mignon’s father, the old harpist, full of melancholy, approaching the end of his life.”
The baritone Andrè Schuen comes from the Ladin La Val (South Tyrol, Italy).He studied at the Mozarteum
in Salzburg under Prof. Horiana Branisteanu, as well as song and oratorio under Prof. Wolfgang
Holzmair. He attended master courses by Kurt Widmer, Sir Thomas Allen, Brigitte Fassbaender, Marjana
Lipovsek, Romualdo Savastano and Olaf Bär. In 2009 Andrè Schuen won a prize at the International
Summer Academy of the Mozarteum, and won first prize at the song competition of the Walter und
Charlotte Hamel Foundation. In 2010 he passed his diploma in opera, song and oratorio at the
Mozarteum with distinction, and was awarded Hanna Ludwig Prize and the Lilli Lehmann Medal.
During his emerging career he has already had guest performances with the Vienna Philharmonic, the
Mozarteum-Orchester, the Camerata Salzburg and other well-known orchestras. Concerts, festivals and
TV performances have taken him to Vienna, Berlin, Munich, Zurich, Tokyo, Puebla (Mexico), Buenos
Aires and Ushuaia (Argentina). At the Salzburg Festival he perfomed various roles since 2006 under
conductors such as Ivor Bolton, Ingo Metzmacher, Simon Rattle and Riccardo Muti, Alberto Zedda and
others. Since September 2010 he has been a member of the ensemble of the Graz Opera, where he
could be heard as Jeletzky (Pique Dame), Masetto (Don Giovanni), Belcore (Elisir d'amore), Ford (Falstaff)
and lastly as the title role in Gasparone, Papageno (Magic Flute) and Roi Alphonse (La favorita). In
Montpellier and Vienna he premiered as Don Giovanni, Guglielmo and Figaro (Vienna).
Besides the Lied Andrè Schuen is also busy in the field of Oratorio: in addition to numerous masses and
cantatas, he sung in J.S. Bach's Christmas Oratorio, St John’s Passion and Mass in B minor, J. Haydn's
The Creation, G.F. Handel's Messiah, W.A. Mozart's Requiem, Brahms's A German Requiem, and finally
Mendelssohn's Walpurgisnacht, the role of Christ in Bach's St Matthew Passion, Fauré's Requiem.
He has been working on lieder with the pianist Daniel Heide – his constantly expanding repertoire
includes Schubert's Winterreise, Schumann's Dichterliebe and Song Cycle op.24; he loves composers
such as Wolf, Ibert, Martin as well as selected songs of various epochs.

Daniel Heide grew up in Weimar, where he was playing the piano at the tender age of five; only a year
later he joined the gifted-pupil class of Prof. Sigrid Lehmstedt at the “Belvedere” special school for
music in his native city.
Five years later, however, he left the well-trodden path of the musical wunderkind and interrupted his
piano studies, swapping the piano for percussion and taking on the athletic challenge of a cycling team.
His return to the keyboard at the age of 17 was a surprise move, but now he was motivated by his own
personal approach to music. He studied piano at university level in Weimar. During these years he
concentrated single-mindedly on work with singers – attending master classes with Dietrich Fischer-
Dieskau and Christa Ludwig – and chamber-music performance. Numerous lieder recitals and chamber
concerts in many German cities, in Austria, Switzerland, France, Scotland, Italy, Spain, Greece, the Czech
Republic and Iceland are proof of his intensive concert activities.
In addition to his regular work with such singers as Stella Doufexis, Ingeborg Danz, Britta Schwarz,
Roman Trekel, Andrè Schuen and Tobias Berndt he has played lieder recitals with Christoph
Pregardien, Simone Kermes, Luca Pisaroni, Johannes Weisser, Ruth Ziesak, Anna Lucia Richter, Norma
Nahoun, Sybilla Rubens and Lothar Odinius. He has also played sonata-recitals and chamber music
with Tabea Zimmermann, Antje Weithaas, Wolfgang Emanuel Schmidt, Barbara Buntrock, Julian
Steckel etc.
One key element in his career as accompanist is the establishment of the concert series The lyrical salon
– lieder recitals at Schloss Ettersburg. Under his artistic direction, lieder have been sung there one
evening a month since May 2011. Lovers of the art song – including ever more young people! – form
a loyal and growing audience for these concerts with celebrated soloists of the lied genre.
Translation: Janet and Michael Berridge
www.der-lyrische-salon.de