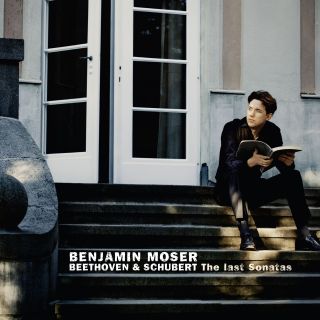 Catalog number: AVI 8553319
Releasedate: 05-06-15
- Young german pianist with world carrier potential, one of the most outstanding German pianists of his generation
- Rare recorded coupling
- Composed almost at the same time the sonatas show clearly the differences of style of the classical and romantic periods.

Benjamin, for your new CD recording you have selected Beethoven’s and Schubert’s very last piano sonatas. Why have you chosen these works specifically, just now, in 2014?
The question is justified, particularly since they have been recorded by great masters on countless occasions. In view of the great artistic maturity required to climb these twin Himalaya peaks of piano repertoire, it is often said – quite rightly, no doubt – that the older the performer, the better. But after having devoted my first two studio recordings to Russian and French music respectively, I found it important to finally bring out an album devoted to Viennese Classicism.
While I was still a student, but then particularly during the last three or four years, I’ve been intensely studying Beethoven’s last sonatas and I’ve often performed Op. 111 in concert. My first idea was to make a Beethoven recording with the last three sonatas, but then I thought it would certainly be interesting to contrast the last Beethoven Sonata with the last one by Schubert, D.960  (incidentally, a combination not so often recorded on one album until now). “Late works” have always held a special place in my heart. Bach’s Art of Fugue, the “Ninth” symphonies of Beethoven, Bruckner and Mahler, Beethoven’s late string quartets, obviously his last piano sonatas, then the late Brahms intermezzi and many more, are all works I particularly love and by which I am profoundly moved whenever I hear them. They contain so much mystery and mysticism; words come to mind such as Weltumarmumg (embracing the world), Weltschmerz, piety, Abschied (farewell), thankfulness, abstraction, highest mastery, and holiness.

Benjamin Moser was born in Munich in 1981, into a family of distinguished musicians.
He studied with Prof. Michael Schäfer (Munich) and Prof. Klaus Hellwig (Berlin) and has received further valuable artistic
instruction from Dmitry Bashkirov, Stanislav Ioudenitch and from Sir Alfred Brendel. Before graduating, Moser already won
First Prize at the Artur Schnabel Competition in Berlin. From 2003 on, he was selected for a scholarship by the prestigious
German National Academic Foundation (Studienstiftung des deutschen Volkes), and in 2005 for the Berlin Steinway
Advancement Prize. He has also been awarded scholarships by the German Musikleben Foundation and the German Music
Council. Internationally He has won a number of competitions (e.g. “Young Concert Artists International Auditions” 2007 in
New York); That same year, he was among the finalists at the renowned Tchaikovsky Competition in Moscow, where he
garnered the prize for the best interpretation of Tchaikovsky, along with the Audience Prize.
The young musician is
regarded as one of the most outstanding German pianists of his generation, having attracted world-wide
attention with solo recitals, chamber music appearances and orchestra concerts.