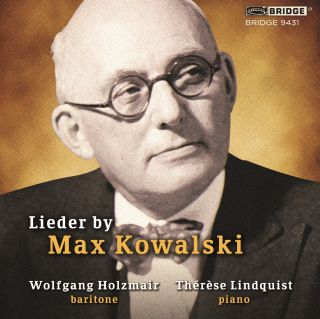 Max Kowalski, who lived and practiced law in Frankfurt am Main, was from 1913 till 1933 a well-known, much- esteemed, and frequently performed composer. Kowalski was born in Poland (then Russia) on August 10th, 1882 and grew up in Germany, to which his parents emigrated when he was a year old. Kowalski’s reputation rests on his production of more than two hundred art songs, which have been in the repertoire of many leading artists, including Heinrich Schlusnus, Maria Ivogün, Paul Bender, Joseph Schwarz, Alexander Kipnis, Karen Branzell, and Hans Hotter. The present CD is drawn from a recital sung in 2011 in Munich by the great Austrian baritone, Wolfgang Holzmair. It offers two song cycles and songs composed to texts by some of Germany’s leading poets. The CD includes Kowalski’s best known cycle, his Pierrot Lunaire, which appeared the same year (1913) as Arnold Schoenberg’s settings.

Wolfgang Holzmair was born in Vöcklabruck, Austria, and studied at the Vienna Academy of Music and Dramatic Art with Hilde Rössel-Majdan (voice) and Erik Werba (lied).
The singer performs in recital throughout the world, including London, Lisbon, Moscow, New York, Seoul, Washington, at the Risör Festival (Norway), Bath, Belfast and Edinburgh festivals (UK), Menuhin Festival (Switzerland), Bregenz and Carinthian Summer festivals (Austria) in collaboration with leading accompanists and pianists of our time. Holzmair is also active in the opera world. Roles include Masino in Haydn’s La vera costanza, Papageno and Speaker of the Temple (Magic Flute), Don Alfonso (Cosi), Eisenstein (Fledermaus), Wolfram (Tannhäuser), Faninal (Der Rosenkavalier), Music Master (Ariadne), the Father (Hansel and Gretel by Humperdinck), Danilo (The Merry Widow), Eduard (Neues vom Tage by Hindemith) or Demetrius (A Midsummernight’s Dream by Britten).
Equally in demand on the concert platform, he sings with leading European and American orchestras, such as the Israel Philharmonic, Berlin Philharmonic, Budapest Festival, Vienna Symphony, Leipzig Gewandhaus, Dresden Philharmonic Orchestra, Cleveland and Concertgebouw Orchestras and the Orchestra of the Age of Enlightenment, under eminent conductors including Blomstedt, Boulez, Chailly, Frühbeck de Burgos, I.Fischer, Haitink, Harnoncourt, Norrington, Ozawa.
Mr. Holzmair has an extensive discography of operas, concerts and songs ranging from Haydn, Beethoven, Schubert Brahms and Wolf to contemporary composers. His recordings have met with critical acclaim. For years he has also been a committed advocate of works, especially lieder, by formerly persecuted composers as is evidenced by his Krenek, Mittler, Zeisl, Schreker and Terezin/Theresienstadt CDs. His recording of Ein deutsches Requiem with Herbert Blomstedt won a Grammy award.
Since 1998 he has taught lied and oratorio at the Mozarteum in Salzburg and given master classes in Europe, Japan and North America. He is also a visiting professor of the Royal Academy of Music (London) and a fellow of the Royal College of Music (London).

Thérèse Lindquist studied piano and chamber music in her home country Sweden and continued her studies of lied with Dorothy Irving and Paul Schilhawsky. As a piano accompanist for lied recitals she has been awarded several prizes (including first prize at the Jenny Lind Competition) and has participated in several master-classes, for instance with Elisabeth Schwarzkopf, Sena Jurinac, Helena Lazarska, Robert Holl and Silvia McNair. Thérèse Lindquist has been official piano accompanist in international competitions such as the Robert Schumann Competition and the International Mozart Competition in Salzburg. She has given concerts together with renowned artists such as  Christian Altenburger, Camilla Nylund, Christiane Karg and Wolfgang  Holzmair at international festivals such as the Heidelberg Spring, the Carinthian Summer,Allegro Vivo, Musik vid Siljan and the Florida Festival of Fine Arts.  In cooperation with countertenor Paul Esswood she made an intensive study of the performance practice of Early Music. Thérèse Lindquist is professor of lied and oratorio at the University Mozarteum Salzburg in Salzburg and also much in demand as director of master-classes in Europe, Japan, Korea and the USA. The National Association of Teachers of Singing has frequently invited her to give lectures and hold master-classes at various universities in the USA (Florida International University, Columbus State University etc.). Her award-winning CD recording of songs by Josephine Lang with Dana McKay, soprano,  (Deutsche Schallplatten ) was highly acclaimed in Dieter Kühn’s biography of Clara  Schumann as a “miniature masterpiece”. Thérèse Lindquist accompanied Wolfgang Holzmair on a CD recording of songs by Anton Webern, entitled Webern pur (Institute of New Music in Salzburg), as well as on a recording of Kowalski songs (Bridge Records) and Wunderhorn songs (on the Col legno label).