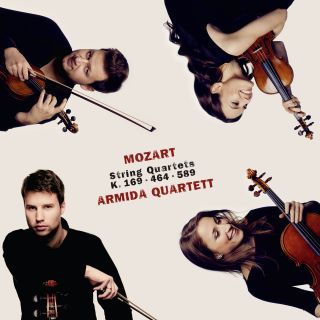 - 10th anniversary of the young German quartet in 2016

- 2016, the Armida Quartet plans to perform all 23 string quartets in public

An adventure for their anniversary: Mozart!

Every string quartet dreams of having its own Mozart cycle: for its 10th anniversary in 2016, the Armida Quartet plans to perform all 23 works in public. The composer was part of each one of their lives long before the ensemble was formed. Playing in orchestras, in chamber music and in solo recitals, the Armida Quartet’s future members already got to know and love Mozart.

In their complete Mozart series, the quartet will not be presenting the string quartets in chronological order. Instead, in each recital, they will place Mozart, the young Wunderkind, alongside the mature composer; the carefree creator alongside the brooding master. “We want to show how modern his thinking was for his time. Many people have a fixed image of Mozart in their minds, as a musician who painted an ideal world with beautiful melodies. But inside, he was burning, struggling, seeking”, as 2nd violinist Johanna Staemmler contends.

Thus the Armida Quartet’s first Mozart CD features a selection of three works from different creative periods.
Since its spectacular success at the ARD International Competition in 2012, at which the Armida Quartet received first prize, the audience prize and six other special awards, the career of the young Berlin string quartet has developed sensationally.
The quartet has been nominated by the Elbphilharmonie Hamburg as one of the Rising Stars of the European Concert Hall Organisation for the 2016/2017 season. In September 2014 the quartet was invited to join the BBC’s distinguished New Generation Artists series, which offers the ensemble the opportunity to appear in various concerts and broadcasts for two years. The Armida Quartet has also made its debut at such renowned summer festivals as the Schleswig-Holstein Festival, the Rheingau Music Festival, the Mecklenburg-Vorpommern Festival, the Davos Festival and the Heidelberg Spring Music Festival.
Founded in Berlin in 2006, the quartet took its name from an opera by Haydn, the “father of the string quartet”. The ensemble studied with members of the Artemis Quartet, also drawing musical inspiration from Natalia Prischepenko, Alfred Brendel, Tabea Zimmermann, Eberhard Feltz, Walter Levin, Rainer Schmidt and Reinhard Goebel. The quartet has participated in master classes with the Alban Berg, Guarneri and Arditti Quartets.
The Armida Quartet won first prize at the Geneva Competition in 2011 and received several scholarships, including those of the Irene Steels-Wilsing Foundation and the Schierse Foundation in Berlin. The young ensemble’s debut CD, featuring works by Béla Bartók, György Ligeti and György Kurtág, was released in 2013 and selected by the German Record Critics’ Award for its critics’ choice list.
During the current season the quartet appears for the first time at the International Festival of Radio France in Montpellier, the Music Festival Brno, the Prague Spring Festival, also presenting concerts in Berlin, Cologne, Munich, Frankfurt, Hamburg, Schwetzingen, Brussels, Paris, London and Edinburgh.
Frequent collaboration with other artists is a priority for the Armida Quartet – the ensemble has worked with Anna Prohaska, Thomas Hampson, Ewa Kupiec, Maximilian Hornung and Tabea Zimmermann. The four young musicians of the Armida
Quartet have taught chamber music at the Berlin University of the Arts since October 2012. The Armida Quartet is also sought after internationally as guest tutors. They led master classes, inter alia, in Singapore and at the Mozartfest in Augsburg.
www.armidaquartett.com