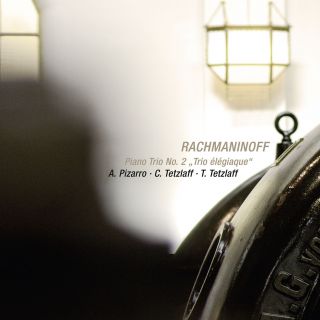 Catalog number: AVI 8553335
Releasedate: 14-08-15
- an early but major work as a memorial to Peter Tchaikovsky’s death 1893
- live recording from the SPANNUNGEN Festival 2014
- Christian Tetzlaff and his sister Tanja Tetzlaff as well as the stunning pianist Artur Pizarro are granting an unforgettable 50 minutes par force ride

Along with the 1st Piano Concerto op. 1 and The Rock (a symphonic poem), the Trio élégiaque No. 2 in D minor op. 9 is one of the most significant works of Sergei Rachmaninov’s youth: he was twenty years old and had just finished Moscow Conservatory with several diplomas.

Additionally, his alma mater awarded him the rare Great Gold Medal for his Pushkin-based opera Aleko, premiered at the Bolshoi Theatre in 1893. Coming from an impoverished family of the landed gentry, the former introvert had now fledged into a self-assured, successful composer. His role model was Peter Tchaikovsky, who, in turn, followed his younger colleague’s output with keen interest and approval.

Rachmaninov studied composition in Moscow with Sergei Taneyev (a disciple of Tchaikovsky’s) and Anton Arensky. He thus became closely acquainted with his idol’s artistic outlook, along with rigorous piano training in the hands of renowned pedagogue Nikolai Sverev and his own cousin, Liszt-pupil Alexander Siloti. No wonder, therefore, that this phenomenally gifted pianist endowed his 45-minute- trio with a challenging piano part, constantly demanding a full spread of the hand. The work’s sad occasion was Tchaikovsky’s sudden passing on 6 November 1893, an event whose mysterious circumstances are not fully explained to this day. (from the lines Notes).

Performed by the Tetzlaffs. this recording is taken from the Festival Spannungen (12 June 2014).

Born in Lisbon, Portugal in 1968, Artur Pizarro gave his first public performance at the age of three and made his television début on Portuguese television at the age of four. He had been introduced to the instrument by his maternal grandmother, pianist Berta da Nóbrega, and her piano-duo partner, Campos Coelho who was a student of Vianna da Motta, Ricardo Viñes and Isidor Philipp. From 1974 to 1990 Artur studied with Sequeira Costa who had also been a student of Vianna da Motta and of Mark Hamburg, Edwin Fischer, Marguerite Long and Jacques Février. This distinguished lineage immersed Artur in the tradition of the ‘Golden Age’ of pianism and gave him a broad education in both the German and French piano schools and repertoire. During a brief interruption of his studies in the USA, Artur also studied with Jorge Moyano in Lisbon, and in Paris worked with Aldo Ciccolini, Géry Moutier and Bruno Rigutto.
Artur won first prizes in the 1987 Vianna da Motta Competition, the 1988 Greater Palm Beach Symphony Competition and won first prize at the 1990 Leeds International Pianoforte Competition, which marked the beginning of an international concert career.
Artur Pizarro performs internationally in recital, chamber music and with the world’s leading orchestras and conductors including Sir Simon Rattle, Philippe Entremont, Yan Pascal Tortelier, Sir Andrew Davis, Esa-Pekka Salonen, Yuri Temirkanov, Vladimir Fedoseyev, Ilan Volkov, Franz Welser- Most, Tugan Sokhiev, Yakov Kreizberg, Yannick Nézet-Séguin, Libor Pešek, Vladimir Jurowski, Ion Marin, John Wilson and the late Sir Charles Mackerras.
Artur is an active chamber musician and has performed at chamber music festivals throughout the world. Artur Pizarro has recorded extensively for Collins Classics, Hyperion Records, Linn Records, Brilliant Classics, Klara, Naxos, Danacord, Odradek Records and Phoenix Edition.
Artur Pizarro has received various awards from his native Portugal for services to classical music and culture including the Portuguese Press Award, the Portuguese Society of Authors award, the Medal of Culture of the City of Funchal and the Medal of Cultural Merit from the Portuguese Government.

Christian Tetzlaff
[…] The soloist was Christian Tetzlaff, who let the music live, breathe and sing with a directness few can equal today. […] Tetzlaff’s assertive first entry immediately raised the level of the proceedings to the superlative and beyond. Sensational. […] about the Brahms VC at The Proms, The Guardian by Tim Ashley For over 20 years Christian Tetzlaff has enjoyed a fulfilled concert life with 100 concerts per year. He started the new season 2014/2015 with concerts at Festivals in USA and Canada and an extensive tour with his Quartet through Austria, Great Britain, Germany, Korea and Japan. As Artist in Residence with the Berlin Philharmonic he will have the opportunity to play in two different chamber music projects, one play&conduct program, a recital for violin solo and as soloist with the orchestra under Sir Simon Rattle (Brahms Violin Concerto). There will also be mini-residence appearances in Paris with the Orchestre Philharmonique de Radio France (Daniel Harding) and in Sydney with the Sydney Symphony Orchestra (David Robertson). Besides tours with the Swedish Radio Symphony and Daniel Harding in Sweden, Austria and Germany, with the Deutsche Kammerphilharmonie Bremen (Paavo Järvi) in Canada, Korea and Japan and with the Deutsches Symphonie Orchester Berlin (Tugan Sokhiev) in Slovenia and Germany, Christian Tetzlaff will also be guest soloist with Munich Philharmonic, Scottish Chamber Orchestra, Rotterdam Philharmonic, Nederlands Philharmonic, Gürzenich Orchestra Cologne, Vienna Philharmonic, London Symphony and Vienna Symphony Orchestra. He will play again in the USA with the Montréal Symphony Orchestra (Juraj Valcuha), Seattle Symphony Orchestra (Ludovic Morlot), Cleveland Orchestra (Franz Welser-Möst) and Pittsburgh Symphony Orchestra (Manfred Honeck). With Boston Symphony Orchestra and Andris Nelsons, Christian Tetzlaff will perform in Boston as well as at the Carnegie Hall. Christian Tetzlaff has already recorded the most frequently played works for the violin. Adding to this, he recently released the sonatas for violin and piano by Schumann and Mozart, together with Lars Vogt on the Ondine label, as well as the Widmann violin concerto with the Swedish Radio Symphony Orchestra / Daniel Harding. A recording of the violin concertos by Shostakovich with the Helsinki Philharmonic / John Storgårds will be released in autumn 2014 by Ondine. Christian Tetzlaff plays a violin made by German violinmaker Peter Greiner and teaches regularly at the Kronberg Academy near Frankfurt

Tanja Tetzlaff
Cellist Tanja Tetzlaff has developed an extensive repertoire including standard works of classical Solo- and chamber music for cello, as well as compositions from the 20th and 21st centuries. In 2011, a recording of cello concertos by Rihm and Toch was released by NEOS. For her performance of the Rihm concerto, she was named “the outstanding soloist”.
Tanja Tetzlaff studied with Prof. Bernhard Gmelin in Hamburg and with Prof. Heinrich Schiff at the Mozarteum in Salzburg.
After having successfully participated in many international competitions, Tanja has been performing with world-renowned orchestras, including the Tonhalle-Orchester Zürich, the Bayerische Rundfunk, Orchestra of Konzerthaus Berlin, Royal Flandern Orchestra, Orquesta Nacional de Espana, Deutsche Kammerphilharmonie Bremen, Orchestre Philharmonique de Radio France, Orchestre de Paris and the Cincinnati Symphony Orchestra.
She has collaborated with conductors including Lorin Maazel, Daniel Harding, Philippe Herreweghe, Sir Roger Norrington, Vladimir Ashkenazy, Dimtri Kitajenko, Paavo Järvi, Michael Gielen and Heinz Holliger.
The 2014/2015 season will see Tanja Tetzlaff touring with the Tetzlaff Quartet in Germany, Austria, Great Britain, in addition to making their debut appearances in the Far East (Korea and Japan). She will be performing the Cello Concertos of Haydn, Dvorak, Shostakovich and Tchaikovsky with various orchestras. Additionally, in Korea and Japan she will be performing the Brahms double concerto with her brother, Christian Tetzlaff, with the Deutsche Kammerphilharmonie Bremen under Paavo Järvi.
Chamber music plays a significant part in Tanja´s career. She gives regular recitals in renowned concert series and festivals, such as the Heidelberger Frühling, the Festivals in Bergen and Edinburgh, and is a regular guest at the Heimbach Festival. Her chamber music partners are some of the world´s foremost musicians, including Lars Vogt, Leif Ove Andsnes, Alexander Lonquich, Antje Weithaas, Florian Donderer, Baiba and Lauma Skride and her brother Christian, with whom she founded the Tetzlaff Quartet. Together with Florian Donderer, she organizes a concert series at the Sendesaal Bremen.
The Tetzlaff Quartet’s new CD featuring the works of Berg and Mendelssohn has recently been released by CAvi, and the Brahms trios with Christian Tetzlaff and Lars Vogt will be released by Ondine in Spring 2015.
With her duo partner, pianist Gunilla Süssmann, Tanja is a regular guest at prominent concert series in Scandinavia and Germany. The duo have recorded a CD featuring the works of Sibelius, Grieg and Rachmaninov, released by CAvi-music, in addition to a recording of the Brahms Cello Sonatas.
Tanja Tetzlaff plays a cello by Giovanni Baptista Guadagnini, made in 1776.