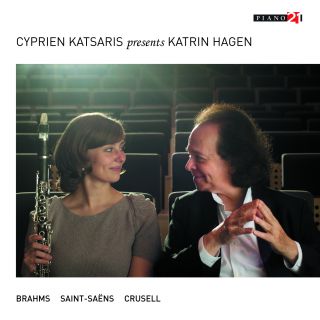 In this recording, Cyprien Katsaris presents the young German-Luxembourgish clarinettist Katrin Hagen.
In 1891, Johannes Brahms was so moved, hearing the clarinettist Richard Mühlfeld in Meiningen playing the Mozart and Weber concertos, that he decided to compose a trio and a quintet with strings for this instrument, followed in 1894 by his two Sonatas for Clarinet (or Viola) and Piano, op. 120; they were to be his last instrumental works. Brahms had truly been beguiled by the clarinet, and it may come as no surprise to learn that he composed these four pieces for “Fräulein Klarinette”. This CD features the lyrical yet intimate Sonata in F minor, op. 120 no. 1.
Just like Brahms in the evening of his life, Camille Saint-Saëns wrote his Sonata for Clarinet, op. 167 just a few months prior to his death. His writing for the piano had become spare for some years past with the consequence that it is not any longer virtuoso. This Sonata, dedicated to Auguste Périer, professor at the Conservatoire and soloist in the Opéra Comique Orchestra, makes wondrous use of every last resource of the clarinet.
A virtuoso musician who helped popularise the works of Mozart and Beethoven, the Finnish clarinettist Bernhard Henrik Crusell composed a host of chamber works, chiefly for the clarinet. His seven concertante works include three clarinet concertos. Concerto no. 3 in B flat major, op. 11 (1807?) starts with two movements similar in style to Weber and Mozart, while the third movement Alla Polacca is a distinct nod towards the finale Rondo alla Polacca of Beethoven’s Triple Concerto.

Born in Trier (Germany) in 1991, the German/Luxembourgish clarinetist Katrin Hagen had her first lessons on her instrument at the age of seven. She was several times prize-winner of the “Jugend musiziert” Competition in the Federal Republic of Germany. At the “European Competition for Young Soloists” in Luxembourg in 2006 she was graded “excellent”. Katrin Hagen studied at the Saar University of Music in Saarbrücken, and graduated as Bachelor of Music (“Artistic Pedagogical Profile”) in 2014. Her main subject was clarinet under Matthias Höfer. She is currently studying for a second Bachelor of Music degree, majoring in Elementary Music Pedagogics under Prof. Dr. Michael Dartsch and Prof. Ulrike Tiedemann, and also a Master of Music degree in Contemporary Music under Prof. Stefan Litwin. Since 2011 Katrin Hagen has been teaching clarinet at the Municipal Music School in Echternach, Luxembourg.