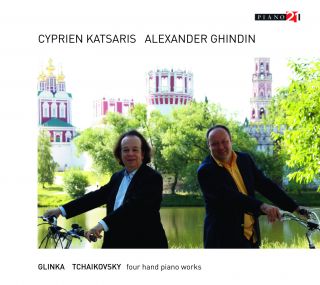 Alexander Ghindin has been unanimously acclaimed by critics and music lovers as one of the most talented and original pianists of the present day. “Alexander Ghindin is not just a virtuoso, of which there are few on the stage today. He is also a true personality, a poet and a singer of the piano, an inspired lyricist and dramatist who has a subtle feel for the music and conveys the composers’ ideas.” (Music Review, 2008.)

He graduated from the Moscow Conservatory. Before entering the Conservatory, at the age of seventeen he became the youngest-ever laureate of the International Tchaikovsky Competition in Moscow, and quickly established himself as one of the most sought-after pianists of his generation. Later he gained Second Prize at the International Queen Elisabeth Piano Competition in Brussels in 1999. These successes assisted the start of the pianist’s extremely intensive recital activities.

He is Artistic Director of his own concert series, projects and festivals in Russia. To name a few: “Piano Duo Festival”, “Musicians for peace”, “Quartet of Pianos”, where he presented such unique programs as: The recital of Four Pianos, Duo Program for Piano and Organ, American music for Two Pianos, including prepared instruments and others. He is also International Artistic Co-Director of the Swedish Royal Festival.

A. Ghindin is a regular participant at international music festivals. He has appeared at the Russian festivals Russian Winter, The Musical Kremlin as well as the Swedish Royal Festival in Stockholm, the Robert Casadesus International Piano Encounters in Lille, the Vladimir Spivakov Festival in Colmar, the Radio France Festival, Folle Journée (France), Bad Kissingen Sommer (Germany), the Ruhr Piano Festival (Germany)…

He wrote an original piano transcription of Maurice Ravel’s orchestral poem La Valse, which was published in Tokyo in 2001 and in St. Petersburg in 2008.

In 2001 Ondine Records released the world première recording of the original version of Rachmaninov’s Piano Concertos nos. 1 and 4 performed by Alexander Ghindin together with the Helsinki Philharmonic Orchestra conducted by Vladimir Ashkenazy.

The musician has made numerous recordings on television and radio in Russia, Belgium, Germany, France, Luxemburg, Poland, US and Japan. He has released 24 CDs with leading recording companies including Decca, Capriccio, Ondine, Tri-M Classics, Russian Season (the Russian partner of Le Chant du Monde), DML, CD Accord and Naxos among others.