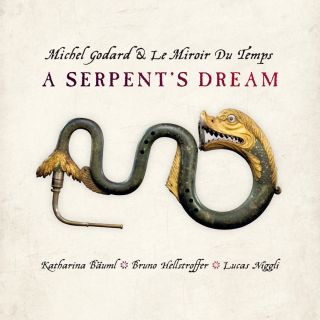 Catalog number: INT 34402
Releasedate: 28-08-15
Michel Godard has discovered it for our time: the serpent, the existence of which dates back to the middle of the Renaissance. When playing music on the wooden instrument with a mouthpiece made of ivory, Michel Godard uses the gestures of someone speaking and singing and exudes a completely unique, warm sound. He performs with the instrument on a timeline between history and the present. While doing that, he tells stories that can shine in different colors and change direction. The serpent resembles a large snake. The sounds unfold in wondrous twists and turns like dreams in the mirror of time.

An incredible instrument! Its name is based on the Latin "serpens" and means "serpent". It looks accordingly. Long, winding and bright green with a flickering head, six finger holes, a mouthpiece made of ivory and a resonating chamber in the case of Michel Godard's instrument. Its origins date back to the middle of the Renaissance. According to tradition, the serpent was invented by Canon Guillaume in Auxerre in 1590. In the mindset of the 16th century, the sound of the zink resembled the human voice in a special way.

Godard, who has earned the reputation as one of Europe's most important musicians in the border area between jazz, improvisation, folk and classical music since the late 1980s thanks to a number of exceptional releases, has included the serpent repeatedly in his concerts and on his CDs for quite some time. Now, the French exceptional artist has devoted an album exclusively to the "serpent" for the first time to emphasize its magical, mysterious and ultimately very human facets. This was a labor of love for the 54-year-old. He moves on a timeline between past and present with the serpent. In the process, he tells stories that can shine in different colors and change direction at any time. The instrument actually resembles a large snake as a result. The sounds unfold in wondrous twists and turns like dreams in the mirror of time.

Michel Godard brings together renowned musicians in his ensemble "Le miroir du temps", who want to break out of customary conventions exactly as he does. "Together they manage to raise awareness of the timeliness of old music age and resonate something of the variety of sound of earlier epochs in contemporary music at the same time," Bert Noglik wrote in the liner notes for "A Serpent’s Dream". Katharina Bäuml is one of the leading Baroque oboists today and also specializes in playing the medieval shawm with her own ensemble "Capella de la Torre", the tone quality of which combines with Michel Godard's serpent in a fascinating way. The theorbo player Bruno Helstroffer also has a lot of experience in historical performance practice, but also experiments with newer ways of playing, which he develops in different contexts. Lucas Niggli, one of the most versatile European drummers in jazz as well as improvised music, knows how to create rhythmically complex and sound-sensitive contexts. Michel Godard also uses the bass guitar; a harmonious extra totally in the spirit of flexibility of Renaissance musicians and the liberties that they took.

For Bert Noglik, it "is the joy of the flow of the melodies seeped in beauty and melancholy," which link the members of the ensemble. They deal with traditions and original compositions as with standards of the jazz: varying, embellishing them freely and improvising. A melody passed down through centuries can just as much be included as Charlie Haden's sentimentally touching composition "Our Spanish Love Song", for which Michel Godard additionally invited the young jazz trumpet player Airelle Besson to give it extra brilliance.

The recordings for "A Serpent's Dream" were made during the festival in Villefranche-de-Rouergue, where the ensemble performed in the Chapelle des Pénitents noirs built in the mid-17th century. The magic of the place seems to flow into the music, as so often is the case in the concerts and productions of Michel Godard. For "Miserere", Godard used an historic manuscript preserved in the Chapel, and he plays the imaginatively decorated original serpent preserved over the centuries of the Chapelle des Pénitents noirs on two tracks ("Old Black Snake Blues" and "Le sommeil").

Visions are created not only for Bert Noglik, which are transformed as they pass by: the cheerful sinners and the black penitents, the troubled brooders and the exuberant dancers – spearheaded by Michel Godard with a snake whose temptations it would be foolish to resist.

Born near Belfort (France) in 1960, Michel Godard soon established himself as an extraordinarily versatile exponent of the tuba, pursuing a career in jazz and classical music.Today he is one of the most virtous tuba and serpent players in Jazz as well as in improvised music.
Michel Godard's tuba performance is fantastic in every sense: his technical skill is astounding, his tone clear and warm, his ability to produce overtones ("multiphonics") and his musicality leaves the listener surprised at how light a seemingly cumbersome and heavy-weight tuba can sound.
In 1979 he picked up also the ancestor of the tuba, the serpent, an instrument with a name derivated after its form - looking like a coiled snake. The serpent's ivory mouthpiece gives it a characteristic warm and intense tone. With this "second" instrument, Michel Godard has taken yet another step in broadening the field of expression in ancient music as well as in Jazz. Since 2002, Michel Godard is the serpent teacher at the "Conservatoire national de musique" in Paris.
On the classical side, Michel Godard played since 1988 with the Radio-France Philharmonic Orchestra, the French National Orchestra, the Ensemble Musique Vivante, , the ancient music Ensemble La Venice and "XVIII-21Musique de Lumieres". He was also a member of the "Arban Chamber Brass" quintet (notably touring Japan, the U.S., Africa) and interprets works from the solo repertory, too. Little wonder that, with recourse to such a fund of experience, he gives international master classes, and has been discovered by European jazz as well as by the avant garde. On the jazz side he was a member of the French Orchestre National de Jazz from 1989 to 1991 . Since then all over Western and Souther Europe Michel Godard has been involved in numerous creative projects with Michel Portal, Louis Sclavis, Henry Texier, Enrico Rava, Michael Riessler, Kenny Wheeler, Ray Anderson, Rabih Abou-Khalil, Sylvie Courvoisier, Klaus König, Simon Nabatov, Wolfgang Puschnig, Linda Sharrock, Pierre Favre, Misha Mengelberg, Linda Bsiri, Gianluigi Trovesi, Christof Lauer, Maria Pia De Vito, Pino Minafra, Luciano Biondini,Willem Breuker, Herbert Joos, Dave Bargeron and many more.
As a composer, Michel Godard was comissioned by Radio France (“Penthés(il)ée II”), Donaueschinger Musiktage/Südwestrundfunk (“de mémoire de tuba”, “Tra la folla, mora, mormora” , “Praeludium”), French Ministere de la Culture (“Bradamente aux aguets”, “les enfants d’un paradis”).