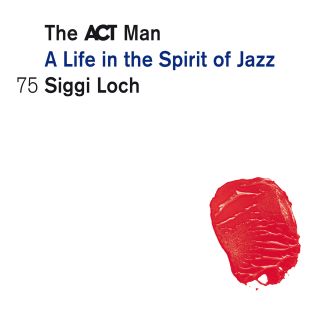 The ACT man, A Life in the Spirit of Jazz, 75 Siggi Loch

- »A Life in the Spirit of Jazz - Siggi Loch 75« represents a fascinating cross-section from the glittering career and from the passionate life of a man who has achieved legendary status in music.

- ACT has been voted label of the year four times in a row at the German ECHO awards, and in 2015 alone, its artists and releases garnered eight ECHOs: the label has achieved international renown.

- However this CD collection is a snapshot of where things are, a provisional taking of stock to mark and to celebrate Siggi Loch‘s 75th birthday.

Siggi Loch, who will be seventy-five on August 6th 2015 has a breadth of experience in the music sector that very few can match. From the nineteen-sixties onwards, those formative days for the modern record industry, his career path rapidly became a giddying ascent.

In his first job, the callow twenty-year old recruit was a rep in specialist foreign sales at EMI Electrola. At a time when 80% of the revenues of record companies were coming from hit singles, Loch was out on the road in a VW Beetle fully laden with newly imported albums, doing the circuit of a select group of record stores. After two years he was approached to become label manager at Philips in Hamburg, where his career as a producer, working with Klaus Doldinger, also started. At the age of just 26, having become the youngest label manager in the world at that time, he was appointed as business manager for the new Liberty Germany company in Munich. In 1972 there followed his appointment as boss of the German business of WEA (Warner-Elektra-Atlantic), and then in 1982 as head of WEA Europe (Warner) in London. That made him one of the top managers in the international record business. Loch owed this meteoric rise to his inexhaustible enthusiasm, combined with an ability to spot the talent and to predict the trends in pop music. But the key to it all was his love of jazz. As a fifteen year old, Loch had managed to slip in to a concert by Sidney Bechet, and that experience was to mark him for life. In his teenage years he initially tried to make it as a drummer, but had the self-awareness to recognize that he didn‘t have the talent to succeed as a professional musician.

But jazz was always there in the background, and the dream to start his own jazz label would be the driving force spurring him on. Despite the fact that the direction of his career as a music manager for its first three decades would be determined by significant discoveries - Katja Ebstein, Can, Amon Düül II, Jürgen Drews, Marius Müller-Westernhagen, Heinz Rudolf Kunze, Helen Schneider and Ideal – he never lost his sense of devotion to jazz: the careers of Klaus Doldinger, Jean-Luc Ponty, Al Jarreau, Joachim Kühn and Philip Catherine were forged with the support of Siggi Loch.

He had been at Warner eighteen years when his boss and mentor Nesuhi Ertegün, the legendary Atlantic jazz producer, stood down as WEA chairman. Loch, who now knew the music business inside-out, took his cue to abandon a lucrative managerial position, and finally to turn the dream of his youth into a reality. In 1992 ACT was born as a jazz label. Twenty-three years later, it is a highly-regarded player on the international jazz scene and, by Loch‘s own admission, this most recent period represents the most important segment of his professional life.

Siggi Loch has always stayed close to the spirit of jazz, so it is appropriate, even inevitable that the five-part CD edition in which he looks back on that life should bear the title: »Life in the Spirit of Jazz - Siggi Loch 75.« As a musical autobiography it speaks for itself, and yet every single track is the repository of enough experiences and memories with which Loch could have filled a book.

With one exception, a preface which precedes main material on the first CD, Loch has collected exclusively the highlights of his own work as producer on these five CDs. Each disc in the anthology is dedicated to a particular strand of his creativity, but there is nevertheless an over-arching shape and structure.


August 6th, 1940 Siegfried Loch is born in Stolp/Pomerania, now Slupsk, Poland.
He lives in Merseburg – East Germany, until 1951, when his family resettles in the west of the country (Hannover)
In 1955 he experiences his first encounter with jazz, a concert with Sidney Bechet in Hannover
From 1956 to 1960 Loch works as an amateur drummer leading his own band Red Onions
In 1960 he enters the music business as a representative for the ASD (Auslandssonderdienst – foreign special service) of EMI Electrola
From 1962 to 1966 Loch works as label manager jazz and producer for Philips Ton (Phonogram) in Hamburg. His first release as a producer is in December 1962 with Klaus Doldinger. In 1963 the American Folkblues Festival, George Gruntz, Ingfried Hoffmann, Klaus Weiss, Attila Zoller and first commercial success with the Star-Club productions featuring The Searchers, Rattles, Spencer Davis Group, Jerry Lee Lewis and others follow
In 1964 Siegfried marries Sissy Loch
From 1967 to 1970 he works as founding managing director of Liberty/United Artists Recordsand Metric Music Publishing in Munich.
Continues to work as a producer for (among others) Klaus Doldinger, Jean-Luc Ponty for Pacifc Jazz. He becomes commercially successful with Katja Ebstein and Sigi Schwaab
In 1971 Loch becomes founding managing director of WEA Music Hamburg (later WARNER Music Germany) and MUZ Music Publishing Munich. There is no further activity as a producer except Doldinger Jubilee 1975, Coryell/Catherine (for Elektra) und Dave Brubeck/Gerry Mulligan (for Atlantic)
In 1975 he is appointed vice-president of WEA International
From 1973 to 1982 Loch is founding member and board member of the Deutsche Phono Akademie (German phonographic academy)
From 1975 to 1982 chairmain of German IFPI (German Record Industry Association)
From 1983 to 1987 president of WEA Europe Inc. in London
In 1988 Siegfried Loch founds ACT Publishing ltd. in London and the music production company ACT Music+Vision in Berlin (with his partners Annette Humpe and Jim Rakete)
The year 1989 sees the disbandment of the partnership with Humpe and Rakete
1992 foundation of the ACT Jazz + World-Jazz Label in Hamburg.
Continuation of his activity as a producer with “Jazzpaña - The Mendoza-Mardin Project” (2 Grammy nominations in the USA)
1993 foundation of “emoción”, a label for “The Art Of Flamenco”
In 1998 Siegfried Loch is awarded a lifetime achievement award by the German Association of Record Reviewers (Jahrespreis der Deutschen Schallplattenkritik)
1998 Loch moves from Hamburg to Feldafing / ACT office to Munich
2000 joint anniversaries: August 6th: 60th birthday / 40th anniversary in the music business
2007 Loch moves to Berlin / ACT office remains in Munich
2010 50th anniversary in the music business / ACT receives ECHO Jazz for "label of the year" / Siggi Loch receives Knighthood ("Knight 1st Class of the Order of the Nordstjärneorden") for his services to Swedish culture in Germany
2011 ACT receives the Echo Jazz audience choice award for "Label of the year" for the second time in a row
2012 ACT celebrates its' 20th anniversary with a series of concerts with the ACT Family Band in Germany, France, Sweden and Turkey, several "ACT Piano Summits" and a concert in the chamber music hall of the Berlin Philharmonic. Germany's jazz fans choose ACT for the third time in a row as label of the year at the Echo Jazz. Siggi Loch receives the Skoda Jazz Award at the Jazzahead fair in Bremen
2013 ACT receives the Echo Jazz audience choice award for "Label of the year" for the fourth time in a row
On November 3rd, 2014 Siggi Loch receives the "Order of Merit on ribbon" of the Federal Republic of Germany for his achievements that served the nation and earlier, in February 2014 the WDR Jazzpreis for his support of jazz from Germany with the "young german jazz" Series
Highlights as photographer:
2007 Book “Love of my Life” Edel / earbooks
2007 exhibition “Love of my Life” at Museum Weserburg, Bremen
2007 Exhibition at Cubus Kunsthalle, Duisburg
2008 Exhibition Deichtorhalle / Haus der Fotografie, Hamburg
2014 Exhibition "Love of My Live" Haus der Fotgrafie, Burghausen