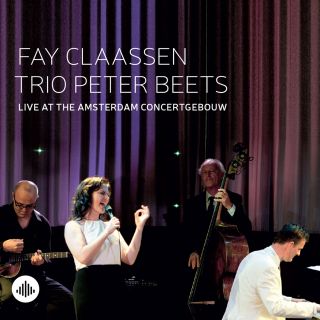 Live at the Amsterdam Concertgebouw

- when asked who would be the successor to her throne, the world renowned jazz vocalist Rita Reys always pointed out Fay Claassen


When asked who would be the successor to her throne, the world renowned jazz vocalist Rita Reys always pointed out Fay Claassen as the only Dutch vocalist who would be able to fill her elegantly swinging shoes. Those who know that Rita Reys was once honoured with the title ‘Europe’s First Lady of Jazz’ at the prestigious 1960 Juan-les-Pins Jazz Festival will realise just how important Reys’ kind words have been to a young singer like Fay Claassen. So it was only logical that after Reys’ sad demise in 2013, it was Fay Claassen who teamed up with Rita’s last working band, The Peter Beets Trio, featuring guitarist Martijn van Iterson, bass player Ruud Jacobs and, of course, the swinging virtuoso pianist Peter Beets himself. Their first gig together took place in 2014 at the famous Amsterdam Concertgebouw, a date that was recorded live to capture the spontaneous, pure and thrilling vibe that filled this sacred building of music with the spirit of Holland’s greatest jazz singer ever. For all of those who missed this very special occasion, there is the album Fay Claassen & The Peter Beets Trio live at the Concertgebouw. Claassen and the Trio combine their improvisational skills resulting in an unsurpassed synergy and musicality. From the first note on it is evident that Beets and his men have paid their dues playing superb renditions of the standard jazz repertoire for many years.
Fay Claassen
Fay Claassen (vocals) Fay recorded her own albums together with many international musicians such as Mike Stern, Kenny Werner, Toots Thielemands, and she was invited as soloist for many CD recordings by the WDR Big Band, Bob Brookmeyers New Art Orchestra, the Millennium Jazz Orchestra and the Danish Radio Big Band.

She cooperated with well known conducters and arrangers such as Jim Mc Neely, Vince Mendoza and Michael Abene. Fay was rewarded with The Golden Record for her double album Two Portraits of Chet Baker. Jazz Times USA wrote about this cd: ’An Astonishing Album’, Down Beat: ‘A mega-production with extremely solo contributions’.

In the Winners Poll of All About Jazz USA the album was proclaimed as ‘Best Vocal Album of the Year’. Moreover, for other albums Fay received a Grammy longlistnomination and an Edison Award. In 2011 her succesfully cd SING! with the WDR Big Band and the WDR Rundfunk Orchester conducted and arranged by Michael Abene was presented. As guest soloist Fay was often invited by the Metropole Orkest and Jazz Orchestra of the Concertgebouw. Her effortless skill of improvisation not only brought her on stages in Europe, but also in Japan, China and the U.S.A.