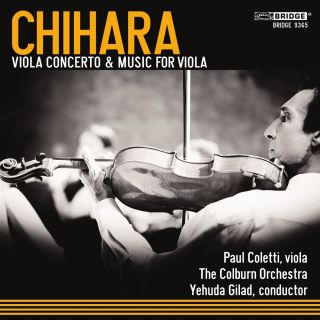 Recorded at Los Angeles's Colburn School in the acoustically superb Zipper Hall, this disc brings together Paul Chihara's complete output for viola, performed by virtuoso violist, Paul Coletti. The featured work on this disc is the premiere recording Chihara's dazzling Viola Concerto. Commissioned by the Cleveland Orchestra, Chihara's concerto is a superb addition to the viola repertoire. At the end of the disc, Paul Chihara is interviewed by disc producer, David Starobin. Also available: Music of Paul Chihara, Vol. 1 (BRIDGE 9267)
Paul Coletti enjoys a prolific career as a performer, composer, professor, recording artist, and conductor. Since 2003 he has taught at the Colburn School. Previous appointments include the Peabody institute, UCLA where he was Head of Chamber Music, and the University of Washington where at 25 he was Head of Strings. He has given master courses and classes on five continents.
As a soloist, Coletti has performed in every major European capital, frequently on the BBC, NHK, Classical Arts and NPR's St Paul Sunday. He is a constant guest at numerous international music festivals, with orchestras including the Los Angeles Philharmonic, the London Soloists, the Berlin and Hannover Radio symphonies, the New Japan Philharmonic. Paul Coletti has performed at the Sydney Opera House, Berlin Philharmonie, Kennedy Center, Walt Disney Concert Hall, Suntory Hall, and at historic sites such as the 4th-century San Miniato al Monte in Florence. He has been a featured soloist at the International Viola Congresses of Chicago (where he performed on Paganini's Stradivarius viola), Seattle, Tempe, Cincinnati, and Redlands CA.
A prolific recording artist, Coletti has been Grammy nominated, and has won accolades for his Hyperion recording English Music for Viola, which won best CD awards from Gramophone and BBC Music magazines and was named one of the 100 best CDs of all time. With the Menuhin Festival Piano Quartet recording of Brahms piano quartets he won the ’Forderpreiz’ in Zurich for Europe's best chamber music recording of the year, and in Japan with his pioneering group Typhoon three Sony CD's reached No.1 in the classical charts.
For Chihara's viola concerto in 2013 Fanfare Magazine wrote, "I don't believe there is a better violist currently on the musical scene today, and few that can match the standard set by this artist.”
At 23, Paul Coletti made his debuts in New York, San Francisco and at his hometown Edinburgh Festival. The New York Times wrote, “The violist Paul Coletti is a remarkable musician with a distinct artistic personality that is entirely his own. Although Mr. Coletti has an impeccable technique, there is nothing ostentatious about his playing; the mastery is there and needs no promotional fanfare. He is an elegant artist who enhances all he plays.” The San Francisco Examiner wrote, “He reminds me of a few times when I had the privilege of hearing the great William Primrose at his best”. The Scotsman in its headline called him "A major disappointment."