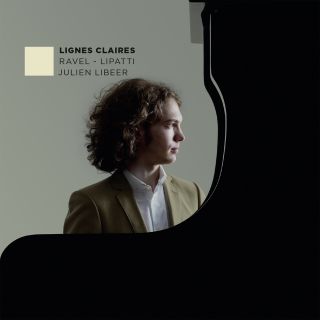 - the title of the album Lignes Claires was chosen by Libeer because "Ravel and Lipatti share a mind of extraordinary clarity, a supreme sense of melody, a mastery of polyphony that allows for wonderfully bold harmonies, and a miraculous precision in the musical discourse"

- According to Maria João Pires, whose patronage and partnership he has enjoyed since 2012, “Julien Libeer is the complete musician who fuses true understanding, a solid intellectual approach, and an infallible instinct for the impalpable.”

Up to now, piano prodigy Julien Libeer (°1987) has – quite surprisingly – been able to steer clear of the international spotlights, in spite of being widely recognized as one of the world’s most astonishing talents.  In 2010, at the tender age of 22, he was nominated “Young musician of the year” by the Belgian music press; in 2008 he had already received the prestigious Juventus Award –previously awarded to later icons like Piotr Anderszewski and Emmanuel Pahud. Since then, he has performed on stages like the Palau de la Musica Catalana (Barcelona), Barbican Hall (London), and the Concertgebouw (Amsterdam), often in series typically reserved for more “weathered” virtuosi.
According to Maria João Pires, whose patronage and partnership he has enjoyed since 2012, “Julien Libeer is the complete musician who fuses true understanding, a solid intellectual approach, and an infallible instinct for the impalpable.”
It is characteristic for his belief that “good exists, but good enough does not” that Julien Libeer has waited until his 28th to issue his first solo recording. On his upcoming debut album entitled Lignes Claires, Libeer lays bare the luminous lines in the music of his favourite composers, exploring the reticent sensibility in Ravel’s Tombeau de Couperin and Valses nobles et sentimentales, and the haunting hypnotism and delicate understatement in the Nocturne and Sonatine by the Romanian piano virtuoso Dinu Lipatti (1917-1950), whose output as a composer has been unjustly eclipsed by his aura as a performing genius.
“The complete musician, who unites, at any musical moment, a true understanding of the piece, a solid intellectual approach and an infallible instinct for the impalpable.” - Maria João Pires

Born in 1987 near Brussels, Belgium, Julien Libeer’s earliest musical memory was the famous documentary on the recording of West Side Story by Leonard Bernstein. The piano, which he took up at age six, quickly became the faithful companion for expressing a love of music that, until today, thrives as much on opera, orchestra and chamber music as on the piano repertoire.

For five decisive years, French-Polish pedagogue Jean Fassina was the patient, demanding, wise teacher that any aspiring musician should have the chance to encounter. This experience was followed by the equally intense collaboration with Maria João Pires at the Queen Elisabeth Music Chapel, whose advice and support strongly infl uenced Julien Libeer’s views over the last years, and continue to do so.

Julien Libeer has been a regular guest of Flagey and the Palais des Beaux- Arts in Brussels, the Théâtre de la Ville (Paris), the Juventus Festival and the Abu Dhabi Music Festival. A member of Maria Joao Pires’ Partitura project, he has recently made his debut in such venues as the London Barbican Hall, the Auditorio Nacional in Madrid, Barcelona’s Palau de la Musica and the Amsterdam Concertgebouw. Upcoming invitations include a Japan tour and performances at the Miami International Piano Festival, among others. An accomplished chamber musician, he performs with Lorenzo Gatto, Camille Thomas, Augustin Dumay, Maria João Pires, Frank Braley, to name just a few.

Julien Libeer has studied piano with Daniel Blumenthal (Royal Conservatory of Brussels), Jean Fassina (Paris), and is an associate artist of the Queen Elisabeth Music Chapel, where he also specialized in chamber music with the members of the Artemis Quartet. Furthermore, he has received the advice of Dmitry Bashkirov, Alfred Brendel, Abdel Rahman El Bacha and Gerhard Schulz (Alban Berg Quartet).

He has received the Juventus prize (most promising young European soloist) in 2008, and was elected Young Musician of the Year by the Belgian Music Press Association in 2010. The Klara award 2013 was attributed to him by the audience of the national radio for classical music.

Much appreciated for his eloquence, Julien Libeer is a regular guest of media at home and abroad. His work has been subject of a TV documentary (“Technique doesn’t exist”, 2013), also available on YouTube.

Based in Brussels, he spends most of his free time reading, swimming or enjoying a good series, and is actively engaged in a number of social projects, all rooted in the idea that music, far beyond its esthetic value, can be a force of change for anyone ready to listen.