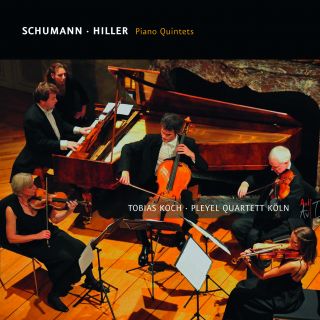 - Ferdinand Hiller, a contemporary of Schumann and one of the most influential musicians in Germany’s 19thcentury is not really known as a composer. A World Première

- His Piano Quintet could be a brother to Schumann’s work, written only a few year after Schumann, and shows the full strength and power of the 19th century music flowers.

A World Première
Among the composers of his day, he was a heavyweight who left a great number of works to posterity: over 200 compositions, including works for the stage, a string of song collections, various concertos and four symphonies, apart from a multitude of writings about music, personal diaries and over ten thousand letters. We are not referring to Robert Schumann, but to Ferdinand Hiller. Ennobled in 1875, he was still ranked without hesitation among the most influential musical figures of his time by the end of the 19th century. Yet his great reputation as a composer and a pianist paled alongside his prominent role as orchestra director and as organizer of the Lower Rhine Music Festivals in Düsseldorf and in Cologne. In 1865, for instance, 20-year old Friedrich Nietzsche participated along with hundreds of other chorus singers in that year’s festival, and wrote to his sister about those unforgettable experiences: “The most beautiful moment of all was the performance of Hiller’s symphony with the motto ‘Spring has to come!’; the musicians were in a state of rare enthusiasm, since we all held Hiller in the highest esteem. After each section, everyone broke into tremendous applause, and once the work was finished we started a similar ruckus that escalated even further. His throne was covered with wreaths of flowers and bouquets, and one of the artists placed a laurel wreath on his head. The orchestra then broke into a threefold fanfare; the old man covered his face and cried for joy.” It might be surprising that young Nietzsche found 53-old Hiller “old”, probably only because the composer had already held important, honored positions for so long. Contemporaries of his own generation such as Mendelssohn, Schumann and Chopin had been his friends, but were long deceased; Hiller must have felt like a monument from another era. Almost defiantly, he viewed himself as the heir of a tradition he traced back to Mozart, and in his writings he adopted a public stance against the New German School. Just as foreign as its main representatives Liszt and Wagner remained to him, he revered Johannes Brahms all the more, and wholeheartedly supported the career of Brahms’s Cologne pupil Max Bruch. (…….from the Liner Notes)
TOBIAS KOCH, pianoforte
To trace the essence of sound with the joy of discovery and open-minded versatility – that is the musical credo of Tobias Koch, one of the most fascinating current performers in the area of historical keyboard instruments. Koch never ceases to surprise his audiences with a series of
exceptional projects, featuring an extensive variety of repertoire and a pronounced curiosity for discovering rare historical instruments and unknown musical gems. Tobias Koch has long been regarded as one of the most distinguished Schumann interpreters on the worldwide scene of
Romantic authentic period performers. “From the very first second he is inspired, and inspires us as well. Tobias Koch’s playing finally does justice to this composer and his intentions: Schumann as a revolutionary Romantic, played emotionally, with virtuoso bravura, entirely devoid of kitsch or pretension. Koch creates musical paintings at the fortepiano that emerge and disappear in a flash. With such spirited playing, each measure becomes a new adventure for the audience.” (MDR Figaro). A comprehensive musical career as soloist, chamber musician and vocal accompanist has led him
to tour throughout Europe. He appears as a guest artist in leading festivals such as Schleswig-Holstein, Ludwigsburg, Verbier and the Warsaw Chopin Festival. Important musical partners include Andreas Staier, Markus Schäfer, Gottfried von der Goltz, Lena Neudauer, Steven Isserlis, the Hofmeister Quartet, Concerto Köln, Frieder Bernius and the Stuttgart Hofkapelle, as well as the Bavarian Radio Chorus. Tobias Koch works in tandem with instrument makers and restorers, as well as with some of the most important musical instrument museums; he is on the faculty of the Robert Schumann Hochschule in Düsseldorf. A wide range of publications and a great number of broadcast productions for radio and television round out his work in the field of music, along with over 25 CD releases of works ranging from Mozart to Brahms.

PLEYEL QUARTET COLOGNE
Founded in Cologne in 2004, the Pleyel Quartet performs on period instruments. A special feature of the Quartet's sound comes from their specific use of gut strings and selective vibrato creating a limpid and warm tonal transparency. Following on their highly-acclaimed performance of Pleyel's Prussian Quartets nos. 7-9 the quartet performend at the Muziek Biennale Lower Rhine, the WDR Festival Tage Alter Musik in Herne, the Lower Austrian Summer Music Festival and the International I.J. Pleyel Society. In 2010 it featured as the opening concert of the Schumannfest in Bonn and was chosen to represent the classical-romantic chamber-music field at the 1st Cologne Festival of Early Music. 2011 saw a performance at the Beethovenfest in Bonn. After recording Pleyel's Prussian Quartets nos. 4-6 in 2009 the group devoted itself to a thorough study of 19th century period performance practices. Especially Joseph Joachim provided a source of great inspiration in the (re-)discovery and assessment of composers such as Mendelssohn, Burgmüller and Klughardt. The Quartet’s curiosity for the historical contexts and taboo breaking handling of the rich literature of the supreme genre of String Quartet as well as with its sound colours with the blanc catgut strings and the historical bows are springing still many surprises. There is this inspirational aspect in the creative process of the ensemble to experiment with the additional sound colours as a string quartet. Currently the repertoire of the Pleyel Quartet Köln covers more than 60 works, containing known as well as rather unknown works by more than 25 composers. The CD recorded with chamber music works by August Klughardt (together with the pianist Tobias Koch) received high international attention and acclaim.