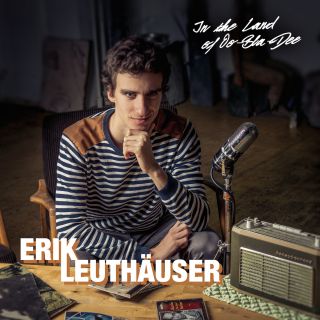 In the Land of Oo-Bla-Dee

On the album In the Land of Oo-Bla-Dee, we encounter eighteen songs from two musical worlds, which nevertheless have much in common. They are played by two different ensembles with the remarkable vocalist Erik Leuthäuser leading the way in each.
First there are nine bebop compositions and solos from his jazz heroes, with German vocalese texts written by Leuthäuser himself. Then there are nine standards, arrangements and compositions played with trioKAIT from Los Angeles which blend effortlessly into the overall picture.
And by the way, the young artists also knows how to pique your curiosity even before you hear the first note. Here he gives an insight into the creation of his debut, and talks openly about his motivation for the individual pieces and the naming of the album:

"I started to write German vocalese texts to bebop pieces for fun, and with my little rhythm section (Silke Krause and Lars Födisch) I found musicians who also liked that type of music. The pieces with trioKAIT from America came about differently. I met Kait, the pianist, by chance at her concert in 'b-flat' in Berlin two years ago, and we played together during the session afterwards. And from that we have, a year later, this recording...

There are quite a lot of personal references in my album! I wrote all of the German vocalese lyrics and they are mostly about my favourite musfavourite artists and their lives and work. But they are also about my own personal day-to-day life as a music student. Even on the pieces with trioKAIT there are references to myself, especially on my composition "Our Place (Frank's Place)" or on "I Was Telling Him But Now I Cry Alone (Betty Carter Medley)". On the latter song, I combined two lesser-known pieces sung quite fantastically by Betty Carter, because lyrically they were the perfect fit.

The title of the album "In The Land of Oo-Bla-Dee" is a piece by the jazz pianist Mary Lou Williams, which I translated into German for the album. The idea of using this song name as the title for the album came to our bassist Lars, and I immediately liked it. On the one hand, because my music and in particular the German vocalese texts for the bebop pieces appear quite "freaky", like they're from another world or an unknown country. And in fact no one, as far as I know, has written German lyrics like that before. While on the other hand, "Oo-Bla-Dee" is, so to speak, a scat vocal phrase used for improvising. And improvising was very important to me on the album. That's what I enjoy the most; on the CD, I think I sing about ten choruses!"

With In the Land of Oo-Bla-Dee, Erik Leuthäuser really steps into uncharted territory. He moves through the realms of vocal jazz like a fresh breeze, with texts from the here and now, and a voice with tremendous potential!
Erik Leuthäuser, 19 years old and born in Freital near Dresden in Saxony, has always made music, and fell under jazz's spell as a child - it can actually happen! And luckily for him too, and for all of those who work with him and who get to listen to him.
He has been the singer for the Dresden Big Band since 2012, and won the Skoda Jazz Prize with them at the national 'Jugend Jazzt' competition. From then on, he has been on tour with his own band and with numerous other ensembles. He has also been the singer for the Bundesjazzorchester (National Jazz Youth Orchestra) since January, and in the spring of the same year, he passed the jazz vocalist entrance exams at four universities: in Dresden, Mannheim, Cologne and Weimar. In September 2014, he took up his studies with Michael Schiefel and Jeff Cascaro in Weimar