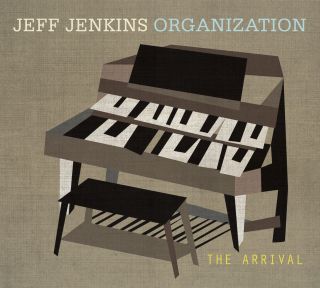 Catalog number: OA2 22124
Releasedate: 06-11-15
"Jenkins never seems to run out of melodic ideas! "
The Organization" follows his lead into new musical realms, while never losing touch with the rich history of the Hammond B3 in jazz."
Kevin Lee, Dazzle Jazz, Denver


Based in the tradition of Larry Young, Jimmy Smith, and Jack McDuff, and pulsing to the heartbeat of current musical trends, Denver's Jeff Jenkins Organization is one of the great regional groups keeping the classic B3 Organ Trio format relevant and alive. Consisting of Jenkins on B3, Dave Corbus on Guitar, and drummer Alwyn Robinson, this is a real BAND, performing weekly for many years, with an extensive book of originals, standards, and rollicking versions of 60's popular music. Over several decades as a composer, pianist and organist, Jeff Jenkins has worked with many jazz legends including Freddie Hubbard, David Fathead Newman, Eddie Harris, Dakota Staton, Benny Golson, John Abercrombie, and Clark Terry. "Jenkins gives us a soulful, gospel strut that is undeniably positive in its outlook. Amen!"  Berman Music Review.
Jeff began his musical life in pastoral Nebraska City, Nebr. He spent much of his youth riding bikes and perfecting the curve ball! He came to the piano through the guidance of his musical family, and quickly found that "playing by ear" proved to be perfect escape from an all too predictable small town reality. As a jazz pianist, Jeff has worked with many American jazz legends including: Phil Woods, Freddie Hubbard, David Fathead Newman, Marlena Shaw, Eddie Harris, Richie Cole, Dakota Staton, Bobby Hutcherson, Curtis Fuller, Benny Golson, John Abercrombie, and Clark Terry. He is heard regularly with many groups, including the Ken Walker Sextet, and his organ trio "The Organization" Jeff spent the decade of the 80's in New York, where he studied with Richie Beirach, Kenny Barron, and Fred Hersch. While in the big apple, he played the off broadway hit "Little Shop of Horrors",
and toured with "The Who's Tommy" in the early nineties.

He has appeared on dozens of CD’s as a sideman, including Brad Goode's "Nature Boy", "Polytonal Dance Party", and "Chicago Red".
Jeff is currently teaching at the University of Colorado at Boulder, and for the Colorado Conservatory for the Jazz Arts.