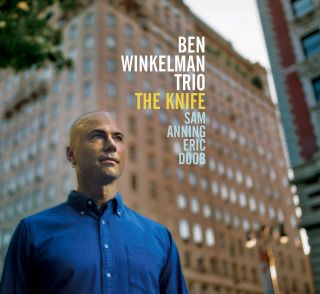 Catalog number: OA2 22122
Releasedate: 23-10-15
"...the trio captures the ear, providing thrilling evidence of a stellar contemporary trio to rank among the best... ” ­ All About Jazz.
"The Knife" is pianist Ben Winkelman’s fourth trio recording as a leader, but his first since moving to New York from Melbourne in 2010. Featuring thirteen of his original compositions, Winkelman, bassist Sam Anning, and drummer Eric Doob explore their diverse musical interests, including Cuban and Brazilian music and odd meter claves. "...the genuine article, a determined crossbreeder of styles whose music is inventive and often surprising. In the era of the postmodern piano trio, Winkelman’s already claimed his place at the table.” ­ Cadence.
Ben Winkelman is an award-winning jazz pianist and composer from Melbourne, Australia. Since late 2010 he has been living in New York City, where he is active on the jazz, Latin and gospel music scenes.

Since 2005, Ben has released three critically acclaimed albums of his compositions with his trio on Australia's Jazzhead label. Between 2006 and 2010 his trio toured Australia extensively and appeared at many of the major national jazz and music festivals. In 2008 they toured Japan and New Caledonia and appeared on Australian national television on ABC TV.

In 2007, his album “The Spanish Tinge” won the AIR Award for Best Independent Jazz Release; “Stomps, Pieces & Variations” was nominated for the 2006 Australian Jazz Bell Award for Best Classic Jazz Album. His third trio album “Odysseys” was nominated for the AIR Award for Best Independent Jazz Release. His work has been supported by grants from the Australia Council, Arts Victoria, the Contemporary Music Touring Program, the Dame Joan Sutherland Fund, the Australian Cultural Fund and the PPCA. He was a semi-finalist in the 2006 Wangaratta National Jazz Awards and was shortlisted for an APRA Professional Development Award in 2006 and 2009.

Besides leading and writing for his trio Ben has been very active as a collaborator and sideman. In Australia he played and recorded with Julie O’Hara and Ali McGregor and toured with the Black Arm Band, Eddie Perfect, and Spanish singer Diego Guerrero. He played in and arranged for Melbourne Latin band Rumberos for 17 years, and was a member of live electronica group Ping in the late 90s.

Ben has taught piano since 1996 and has presented workshops at universities and high schools around Australia.

“For seventy absorbing minutes, the trio captures the ear, providing thrilling evidence of a stellar contemporary trio to rank among the best... succeeding on every level... this fine trio statement whets the appetite for what lies ahead.” - All About Jazz