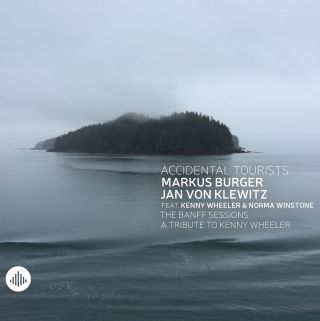 The Banff Sessions - A Tribute to Kenny Wheeler

Catalog number: CR 73403
Releasedate: 27-11-15
- A suite in 8 parts written by Markus Burger and Jan van Klewitz during a Jazz Clinic by Kenny Wheeler at the Banff Center (Canada)

Pianist / bandleader Markus Burger: "We are delighted that Challenge Records’ upcoming release, inspired by the work and talent of one of our most treasured musical idols. I had the great pleasure of meeting Kenny Wheeler in 1993, during my artistic residence at the Banff Center for the Arts, in Alberta, Canada. My quartet, Septer Bourbon, had just finished recording our first CD in 1992, "Fishing for Compliments", and submitted it as part of our application to attend the Jazz Clinic at the Banff Center. We were ecstatic not only to learn that we had been accepted, but also that we would have the privilege to study with one of the greatest jazz musicians of our time, Kenny Wheeler. The experience was deeply inspirational, and very prolific for us, as we got to work on writing new material from day one. Kenny was kind enough to let us research his musical scores, and even took the time to show us some of his “Wheelerisms,” a term we began using to describe his melodic and harmonic signatures. But what is most memorable about studying with Kenny was his encouraging feedback whenever we shared our early musical sketches, written by me and my collaborator Jan von Klewitz, during the second week of the Jazz workshop. Kenny gave us so much confidence in the material we composed at the workshop, that we decided to add lyrics to a couple of the songs and ask the legendary Norma Winstone to perform them. In May, 1993, we premiered the entire suite of compositions in the Blue Room at the Banff Center for the Arts. I did get a chance to see Kenny again on a few occasions since our first meeting in 1993, and each time, I was truly humbled at his kind words about our work at the Banff Center."

The Accidental Tourist series is a concept based on an idea by Cibelle Burger who co-produced the album with Markus Burger.

Composers:  Jan von Klewitz Movement 1-4, Markus Burger Movement 5 and Coda 1,2 3
Mastering: James Linahon
Markus Burger is a German born, L.A. based pianist, composer and band leader. His music has been performed in Europe, the former Soviet Union, Africa, and most recently in the United States. He began studying piano at age six and later earned his Diplom in Performing Arts from the Essen Folkwang Hochschule in Germany, a B.A. in piano and Composition from the University of Maastricht in the Netherlands and a Certification in Popular Music from the University of Hamburg, Germany. He studied with Peter Walter, John Taylor, Kenny Wheeler and Kenny Werner. He has released 11 albums, featuring his own compositions and arrangements, among them, his most recent release, "The L.A. Sessions" with his newly formed jazz collaborative, Accidental Tourists. “The L.A. Sessions," released by Challenge Records in 2012 (2013 worldwide), is the first of what Burger hopes will be a series of albums, and sees him launching his collaborative by teaming up with jazz veterans, drummer Joe LaBarbera (Bill Evans, Art Pepper and Tony Bennett) and bassist Bob Magnusson (Art Pepper, Bill Evans). After months of composing and arranging, sifting through his favorite standards, and figuring out where and with whom to record first, Burger found himself serendipitously (and accidentally) launching his musical trek in his own “backyard" of Los Angeles, collaborating with the former rhythm section of his idol and early jazz influencer, piano legend Bill Evans. In addition to Accidental Tourists, Burger has been playing to sold-out audiences around the world with his Spiritual Standards duo project, with Berlin-based saxophonist Jan Von Klewitz. Spiritual Standards, the project, is a collection of contemporary jazz improvisations of Johann Sebastian Bach’s greatest chorals and masterpieces, which at one point, made it into the Top 20 in the German Jazz charts in 1999. The duo were also the winners of the coveted 2000 Bach Award of the city of Erfurt, Germany. His second album, The Smile of the Honeycake Horse, with his quartet Septer Bourbon, received rave reviews from the European press and Down Beat Magazine in the United States, and achieved something of a “cult following” in Germany.