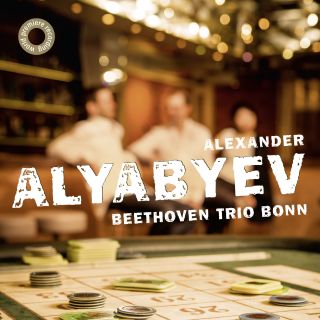 Catalog number: AVI 8553338
Releasedate: 13-11-15
Alexander Alyabyev enrolled in the Russian army when he was 25. As a calvary officer he took part in campaigns against Napoleon that took him all the way to Paris; he was badly wounded in the arm and transferred to the National Guard, where he became one of its best officers. Alyabyev had made himself a name in music salons as a composer of romanzas and brief pieces for piano prior to the Napoleonic War. After his retirement he was able to devote himself entirely to music and chose to live in Moscow. He was also known to be addicted to gambling and card games. Toward 1825 he was involved in a card game brawl where someone was killed. He was placed in jail for three years and finally sentenced to exile. From 1825 until the end of his life, Alyabyev remained under constant police supervision and was forbidden to perform in public. Alyabyev’s early works show his admiration for Beethoven, and he also wrote a great deal of salon music. His style was generally conservative and is often compared to early Schubert, particularly in view of his important art song output. In fact, Alyabyev is often nicknamed “the Russian Schubert.”
The lively interpretations of the Beethoven Trio Bonn, founded in 2005, have earned them an excellent reputation. In May 2007, the Ongaku no Tomo magazine praised their “clear musical conception, incredible beauty and Romantic flair”, resulting in “breathtaking, refreshing” renditions. The members of
the ensemble – Rinko Hama (piano), Mikhail Ovrutsky (violin) and Grigory Alumyan (cello) – lead successful solo careers, are prizewinners of renowned international competitions and have made many radio and CD recordings. Two 1st Prizes at the UNISA International Music Competition as well as combined performances as 1st Concertmaster and Principal Cellist of the Beethoven Orchestra Bonn laid the foundations for the collaboration among these three befriended musicians. Rarely do chamber music partners complement and inspire one another in such a unique way. Most of all, they share a passion for music of the Romantic period. However, their creative sensitivity, based on individual virtuosity, ensures that the Beethoven Trio
Bonn is well-suited to interpret music from all periods. Apart from works by Beethoven, the Trio performs the entire repertoire written for the piano trio genre, thereby proving their exceptional versatility and creativity. In recent years they have cultivated a particular passion for Russian piano trio repertoire. Released in 2007, their début CD with works by Beethoven and Mendelssohn was rapturously received by the critics, and they were invited to perform in many countries. Their second release – entitled “NO 1” – appeared in 2013 in collaboration with Deutschlandfunk Radio and the renowned Cologne label Avi-music, presenting the first piano trios respectively composed by Sergey Rachmaninoff, Dmitri Shostakovich and Anton Arensky, along with the world première recording of Nikolai Kapustin’s Divertissement in Four Movements, op. 126. The Trio inspires audiences and music critics alike with their fiery, youthful interpretations. They have been invited to perform in South Africa, Austria and the US; their Japan tour culminated in a thunderously applauded recital in the Kioi Hall in Tokyo. In their home province of North-Rhine-Westphalia, they form part of the “Best of NRW” selection. In January 2015 the trio made their Spanish début with a tour to five major music venues in the Iberian Peninsula.