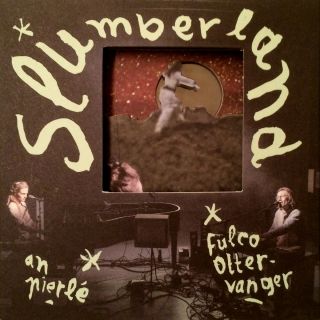 - the album is a collaboration between popular Flemmish artists (and Oscar-nominée!) An Pierlé and Fulco Ottervanger

- Including a download code for the video belonging to the Slumberland performance. (video by Natalie Teirlinck)


Slumberland is a breathtaking theatrical-musical journey into the night. The moment everything changes and dreams overtake reality. It are mostly kids that take you along their mesmerising phantasy into a fascinating world. They tell you how they sleep, what they dream and how the night falls. The songs written by An Pierlé and Fulco Ottervanger tell a story about some amazing figures that meet eachother at night.

An Pierlé
Perhaps best likened to a Belgian Tori Amos, An Pierlé created a similarly theatrical and operatic brand of piano-based art-pop. Born in 1974, Pierlé embraced music, acting, and dance as a toddler and briefly studied classical piano before enrolling at Antwerp's Studio Herman Teirlinck Art School at age 17. During her third year she headlined her first solo program of original material, an event further distinguished by the transparent ergonomic ball she sat upon instead of a traditional piano stool, a component of her live performances from that point forward. In 1996 Pierlé entered her demo tape in the annual Humo's Rock Rally competition, ascending to the final round on the strength of her jury-favorite rendition of Gary Numan and Tubeway Army's synth pop classic "Are Friends Electric?" The song also emerged as a Belgian radio hit, but Pierlé shied away from the attendant hype, instead spending close to two years as a member of the touring company behind the theatrical production Bernadetje. A handful of solo concerts nevertheless kept her on the radar of pop music executives and fans, and in early 1998 Pierlé finally signed to Warner Music Benelux to begin sessions for her debut LP, Mud Stories, issued the following year. Composer and arranger Koen Gisen emerged as Pierlé's collaborator for her sophomore release, 2002's Brian Eno-influenced Helium Sunset. A subsequent tour featured a full backing band and orchestra, additions that also shaped 2006's White Velvet. In 2013 she issued a solo release and in 2015 she made the soundtrack for Jaco Van Dormael's Le Tout Nouveau Testament which got nominated for an Oscar.


Fulco Ottervanger
Fulco Ottervanger is a Dutch Belgian-based multi-instrumentalist, vocalist, composer and improvisor. He has been writing, recording and performing songs and compositions since his early youth. He graduated as a jazz pianist and studied modern classical composition. He is composer and bandleader of contemporary jazz trio De Beren Gieren, krautpop band STADT and drums/keyboard duo BeraadGeslagen. He is also involved in different theatre and dance projects.