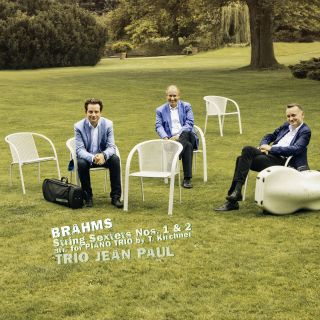 - These arrangements of Brahms’ String Sextets for Piano Trio are a rare recording without any major competition.

- The arrangements are done by a close friend of Brahms who blessed the score “as it could be done by myself”.

I was truly relieved to learn that you seem to be not entirely unsatisfied with my arrangement of your sextets. Indeed I put much work into them, but it is always a delicate matter when one senses the author's fine nose lurking in the background. You went through the proofs meticulously, as it seems, and it will thus be hard for me to find further printing errors. There are quite a few in the score (of the sextets)! Ah, well, even fools should find some enjoyment when they deal with them one hundred years from now. In my opinion, trio players will regard these two works as a welcome gift. That last 'prophetic' sentence by Theodor Kirchner - in an 1883 letter thanking Brahms for having praised his arrangements of his sextets - was unfortunately not fulfilled: these trio arrangements of all kinds: according ot general opinion, they are at odds with the current demand for 'historical authenticity'. Anyone who sets out to arrange a musical masterpiece is undoubtedly assuming an immense artistic responsibility. In the best of cases, an arrangement should not only permit other instruments to perform the original in a new setting, but it should illuminate certain aspects in a way the original could not. A truly well-achieved arrangement is thus also an act of interpretation that transforms its model to a certain extent. We, the two string players in the Jean Paul Trio, obviously knew an dloved Brahms's two string sextets from practical experience, having performed them frequently in their original scoring - how much greater was our surprise and fascination when all three of us discovered Theodor Kirchner's arrangements for piano trio! Not mere adaptations for a Hausmusik setting, they represent so much more: in our opinion, these are thoroughly ingenious elucidations of Brahms's string sextets...'
The Trio Jean Paul, founded in 1991, is one of today’s most distinguished chamber music ensembles and a popular guest at the international concert venues. Among the highlights of the latest seasons were concerts in Vienna, Berlin, Brussels, Bremen, London, Zurich and Hamburg as well as at the
renowned Sociedad Filarmónica in Bilbao, Gulbenkian Foundation in Lisbon and Liceo de Cámara in Madrid. Concerts in Los Angeles, Vancouver, Quebec and Montreal marked their last tour of the US and Canada. After First Prizes at the international competitions in Osaka (1993), Melbourne (1995), and at the German Music Competition, an extensive concert career has developed which has led the ensemble on a regular basis to major musical centers and tours to Australia, Japan, New Zealand, South-America, and the USA. Master classes and performances at highly rated international festivals are par of their agenda. Regular cooperation with musicians like Sharon Kam, Paul Meyer, Lars Anders Tomter and Vladimir Mendelssohn adds to the multifarious artistic work of the Trio. By naming their ensemble after the romantic author Jean Paul, the three musicians not only refer to their special affinity for the works of Robert Schumann, but also to the fundamental artistic idea of making the music’s speech-like and rhetorical elements to the point of departure for their interpretations, which reflected in many recordings. An important area of the Trio’s work is therefore its occupation
with the contemporary repertoire as numerous world premieres by famous composers such as M.C. Redel, K.Y. Chong, M. Denhoff, G. Kerry, V.D. Kirchner und A. Gürsching show. 2014 brought the highlight of the world première of Wolfgang Rihm’s triple concerto, dedicated to Trio Jean Paul, at the Berliner Festwochen with Cologne Radio Symphony Orchestra under Jukka-Pekka Sarastre.