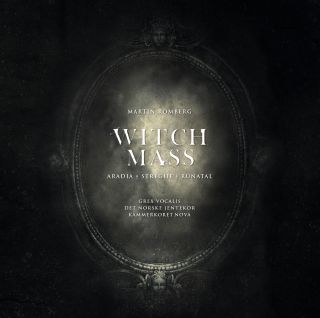 Catalog number: LWM 009
Releasedate: 01-01-16
- Martin Romberg, Grex Vocalis, The Norwegian Girls' Choir, NOVA Chamber Choir, Choir music, Contemporary classical, Witch Mass, Witches, Streghe, Aradia, Norse Mythologi, Runes, Mysticism, Fantasy.
WITCH MASS
Composer Martin Romberg is releasing “Witch Mass”, his second solo CD on the LAWO Classics label, this time with music for choir.
The compositions are based on ancient magic spells and hymns to nature spirits — rituals, it is said, still secretly practised in rural Italy. Moon goddess Diana’s daughter Aradia, Pan, blood sacrifice, and boiling witches’ cauldrons are some of the elements. Yet it is white magic, not black, that is always central.
“Aradia, or the Gospel of the Witches” and “Streghe” (Witches) are followed by a composition inspired by Norse mythology, “Rúnatal”, or the “Rune Song of Odin”. It is the story of how the Norse god hung for seven days on Yggdrasil, the World Tree, and sacrified an eye to achieve eternal wisdom. The work is a vigorous tribute to pre-Christian Norwegian culture and is sung in Old Norse.
The works on this recording are performed by three of Norway’s leading choirs: Grex Vocalis, Det Norske Jentekor, and Kammerkoret NOVA.
Martin Romberg is a Norwegian classical composer educated in Vienna who early on was interested in “setting magic to music.” From his base in France he has worked with close to twenty orchestras throughout Europe, together with numerous choirs and soloists the world over. Mysticism, fantasy literature, and even comic books serve as the background for his music.


Martin Romberg was born in Oslo, Norway in 1978. He studied classical composition with Michael Jarrell and fi lm music with Klaus Peter Sattler. Romberg composes music in a post-Romantic tonal language, based primarily on themes from fantasy literature, the visual arts, the world’s mythologies, and comic books. He endeavours above all to find expression in the borderland between popular culture and classical music. From his base in France he has worked with close to twenty orchestras throughout Europe, together with numerous choirs and soloists the world over. He has also worked extensively as orchestrator across genres with, among others, Ulver on its Messe I.X-VI.X and on the arrangement of Ingolf Wunder’s paraphrases of orchestral works by John Williams, released by Deutsche Grammophon in 2012. The French editor Éditions Gérard Billaudot began publishing a selection of Romberg’s works in 2010.

Grex Vocalis was founded by Carl Høgset in 1971 and soon established itself as one of Norway’s leading chamber choirs. Høgset’s ideal sound was shaped by Continental infl uences, and the choir was moulded in the cultivation of the Early Music tradition, in which homogeneity, purity, lines, vocal timbre, and focus on textual content and expression are utterly essential. These same qualities are indispensable in the choir’s work with other musical epochs. Besides performances in Norway, Grex Vocalis has toured throughout Europe and has visited Japan and Cuba. The choir has won first prizes in national and international competition, has released ten recordings and contributed to numerous others, and three times has been awarded the Spellemann Prize, the Norwegian Grammy.

Det Norske Jentekor (The Norwegian Girls’ Choir) is a choir with a proud tradition and a reputation for performing at the highest artistic level. The singers come from around the southeastern part of Norway and are selected on the basis of auditions. The choir originated in 1947 as the girls’ choir of the Norwegian Broadcasting Corporation (NRK). It continues to play a prominent role in Norwegian cultural life and has fostered a number of notable Norwegian singers and artists. It has made contemporary music and Norwegian traditional music its trademark. The standard repertoire of Det Norske
Jentekor also includes commissioned works written for the choir. Of the four choirs, with members ranging in age from six to twenty-two, it is the eldest singers known as Studiokoret (The Studio Choir) who have made this recording conducted by Anne Karin Sundal-Ask.

Kammerkoret nova (NOVA Chamber Choir) was founded in 2001 and is known for its homogeneous sound and its ability to convey musical moods. The choir has won a number of prizes, national and international. In the autumn of 2009 NOVA won two fi rst prizes at the Grieg International Choir Festival. That same autumn it also won the adult choir category at Let the Peoples Sing, the European Broadcasting Union’s international competition for amateur choirs. Kammerkoret NOVA appeared in 2012 in a performance of Mahler’s Symphony No. 8 in Oslo Concert Hall and Mozart’s Requiem in Stavanger Cathedral — this in addition to a number of larger concerts and performances of commissioned works by Ola Gjeilo, Henrik Ødegård, Andrew Smith, and Torbjørn Dyrud, among others. Vivianne Sydnes conducted this recorded performance.