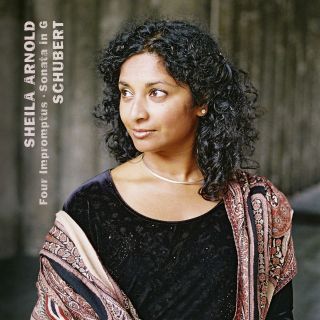 Catalog number: AVI 8553336
Releasedate: 05-02-16
- Sheila Arnold is one of the most integer Schubert interpretors in Germany
- Both, the G Major Sonata as well as the Impromptus are of a similar kind of typical Schubert Genre
- Espescially the Impromptus are counted as the most played Schubert pieces worldwide

If I try to put the essence of these works into words, I find it hard to remain objective, for subjectivity is this music's true core. Indeed we are confronted here with a series of different forms: sonata form, ABA form, theme with variations, rondos and dances. Yet those very forms start to metamorphose as we approach the threshold of musical Romanticism - and its forerunners were Romantic poets, several of whom Schubert counted among his close circle of friends. In contrast with cosy Biedermeier placidity, the painful isolation and yearning of deeply sensitive individuals is something equally omnipresent in that troubled age, and ultimately it does not make any difference whom or what the yearning is for. Here we have brooding meditation, fragments, inner disruption, the dissolution of the borders that separate reality from the world of appearances, life form death: nature experienced as a projection of one's own inner emotions, inside is outside'. Instead of an old-fashioned doctrine of the affections, Schubert traces a psychogram. That is the context within which I view the Four Impromptus D 899 and the so-called 'Sonata-Fantasia' D 894. These works have been part of my life since early youth. My view of them has obviously shifted several times, and will hopefully continue to do so. This recording not only reflects the influences of daily life and the encounters I have enjoyed with wonderful people and literature: it likewise captures a glimpse of my attitude in a fleeting moment, particularly my experience with historical instruments - a passion I have been pursuing for almost twenty years.' - Sheila Arnold
Wondrous timbre enchantment and variegated colors, paired with masterful touch and phrasing.
SWR2 Klassikmarkt
Sheila Arnold belongs to a new generation of pianists who feel as much at home on the modern concert grand as on the fortepiano: the symbiotic feedback between the two instruments never ceases to inspire her. Her repertoire spans keyboard music ranging from the 1700’s to world premieres of contemporary music. Very early on, her triumph as a finalist at the Clara Haskil Competition in 1995 and the Mozart Prize
awarded by the Wiesbaden Mozart Society at the Salzburg International Mozart Competition reflect her special affinity with that composer: Sheila Arnold’s Mozart renditions have always been euphorically acclaimed by reviewers and audiences worldwide. Ms. Arnold studied under the guidance of Heidi Köhler and Karl-Heinz Kämmerling, and went on to garner a considerable number of first prizes and successes at German and international competitions. She was also selected for a series of scholarships and awards, leading to extensive worldwide appearances since her youth. Many of them were recorded for radio and television broadcast, as well as on CD. Renowned music festivals have invited Ms. Arnold to perform in Europe and the US. She has collaborated with well-known orchestras such as Lausanne Chamber Orchestra, the Orchestra of Bonn Beethovenhalle and Prague Chamber Orchestra, and with conductors such as Jesús López-Cobos, Marc Soustrot, and Michael Hofstetter. Her chamber music partners include the likes of Nina Janssen, Sergio Azzolini, Wilhelm Bruns, Ralf Manno, Guido Schiefen, Michael Faust, Isabelle Faust, Alexander-Sergei Ramírez, the Mandelring Quartet, and many others. Inspiring encounters and collaborations with renowned musician colleagues have taken place at the Spannungen Chamber Music Festival (Heimbach), and at the Music Festival in Hambach (Neustadt). Sheila Arnold’s previous CD with works by Brahms and Schumann was released in 2010 and featured as a CHOC selection in Classica, the French classical music magazine. In 2006 Ms. Arnold was appointed piano professor at Cologne Musikhochschule; she is also frequently invited to give international masterclasses.