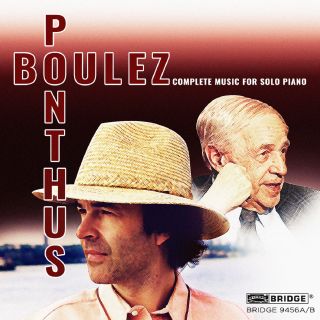 Catalog number: BRIDG 9456
Releasedate: 22-01-16
- on these discs, Marc Ponthus plays all of Boulez's solo piano music, including the expanded 2001 version of Incises

Pierre Boulez's solo keyboard output remains heavily weighted in favor of the most radical, intransigent phase of his development—his twenties—although it is no coincidence that these were also his most productive, self-assured years as a composer. As Charles Rosen, one of Boulez’s important early interpreters, observed, the piano “is a traditional outlet for experimentation: it allows an immediate control over the musical idea,” one that “often indicates at once the nature of the revolution and suggests its limits.” Those limits would be reached in earnest with the unfinished Third Sonata, one of the essential termini of the postwar avant-garde project in its most “heroic” phase, and in many respects the decisive venture of Boulez’s creative life.  On these discs, Marc Ponthus plays all of Boulez's solo piano music, including the expanded 2001 version of Incises.
Uncompromising in artistic standards, Marc Ponthus is the first pianist to perform solo programs featuring a single avante-garde composer from the second half of the 20th century including Boulez, Stockhausen (3 concerts) and Xenakis in North America. He performed the world premiere of a Webern's unpublished work in New York City. In 2004, he recorded the complete piano music of Iannis Xenakis for Neuma Records, receiving glowing reviews from Gramophone Magazine and BBC Magazine. Ponthus has conducted a number of ensembles, mostly for contemporary music and has staged and directed contemporary chamber operas.

In addition to his work as a pianist, Ponthus is the director of the Mannes College of Music's Institute and Festival for Contemporary Performance. Ponthus was the editor and wrote the preface for a collection of essays of Elliott Carter (A Centennial Celebration), published by Pendragon Press in 2008. He is a recipient of the Tanne Foundation's Award for achievement in the arts.

In addition to his artistic endeavors, Ponthus has been involved in humanitarian issues, writing for the London newspaper The Independent about his experiences in war-torn Sarajevo. An oboist from Bosnia was able to come to the US to study at Boston's New England Conservatory of Music as a result of his efforts.

Ponthus has combined video collage in live performances. He has worked in theatre and has directed short films. His short film on concepts of mythology was chosen as an Official Selection at the Northeast Film Festival in 2013. Ponthus also composes under the nom de plume Outis.