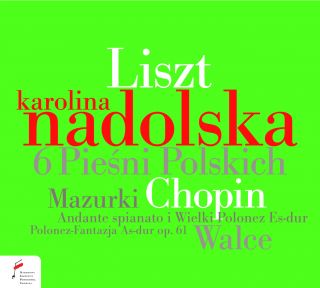 Catalog number: NIFCCD 702
Releasedate: 11-03-16
- a new instalment in the young talents series by Chopin Institute
The Young Talents, Debuts series, which presents recordings of outstanding Polish musicians from the younger generation, is part of the phonographic activity of The Fryderyk Chopin Institute and, at the same time, represents an important aspect of its activity associated with promotion and sponsorship of outstanding artists. Karolina Nadolska, winner and laureate of an array of important piano competitions (in Europe and Korea), successfully combines an intense concert career in Poland and abroad with teaching activity at her alma mater: the Fryderyk Chopin University of Music in Warsaw.
This recording was made at the Witold Lutosławski Concert Studio of Polish Radio, Warsaw, 29–30 September, 2 October and 3 December 2013.
Nadolska Carolina - blessed with musical sensitivity and creativity of their interpretation Carolina Nadolska developed his artistic personality under prof. Catherine Popova - Zydroń, and then while studying at Warsaw's Fryderyk Chopin University of Music in the class of Piotr Paleczny. In 2009 she graduated with honors, and her piano studies were crowned with a solemn concert, which performed as a soloist of the National Philharmonic Orchestra.
She has performed on five continents - including in the United Zjednoczontch, Japan, Australia, Argentina, Germany, UK, Spain, Sweden, Italy, Hidzpanii, Estonia, France, Switzerland, the Netherlands, Tunisia, Croatia, Lithuania and in many Polish cities. She has participated in master classes with famous professors such as Vladimir Krainev Karl-Heinz Kammerling, Boris Berman, John O'Conor, Jacques Rouvier, Dominique Merlet, Bernard Ringeissen, Mr. Indjic and Dina Yoffe.
Winner of many international and national competitions: The Piano Teacher is also the winner of the Second Prize at the International Chopin Piano Competition in Marianske Lazne, winner of the Grand Prix III National Festival "Chopin interpretations of the Young" in Konin and winner of international piano competitions in Narva, Aachen and Competition. Paderewski in Bydgoszcz.
He continues as a soloist and chamber concert activities, referring at the same time successes in pedagogical work as an assistant to the Warsaw Fryderyk Chopin University of Music in the master class of prof. Piotr Paleczny.