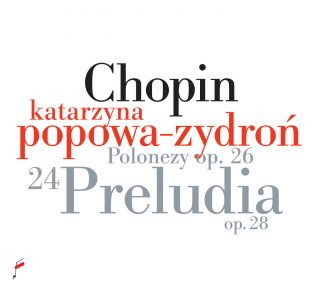 Catalog number: NIFCCD 217
Releasedate: 11-03-16
- a new volume of Chopin's complete works on modern instruments
Both of the Chopin opuses on this disc, the Preludes op. 28 and the Polonaises op. 26, written during the first decade of the composer's exile, display to perfection the fullness of the composer's personality. In the interpretation of Katarzyna Popowa-Zydroń, they are masterfully balanced. Bringing out all of the most important grimaces of the composer's face, with his aristocratic elegance and, at the same time, Romantic frenzy, the distinguished artist draws a deep, psychological portrait of this representative of the Great Emigration. The pianist became chair of the jury at the 17th Fryderyk Chopin International Piano Competition in October 2015.
The recording was made at Warsaw Philharmonic Concert Hall in Warsaw from 13 to 15 September 2014.
Ekaterina Popowa-Zydroń, Polish pianist of Bulgarian origin. Graduated with honours from State High School of Music (now Academy of Music) in Gdańsk, from prof. Zbigniew Śliwiński's class, in 1973. Completed her postgraduate studies in Hochschule für Musik und darstellende Kunst in Vienna, in prof. Alexander Jenner's class. Participant of master classes run by Suzanne Roche, Dieter Zechlin and Georgy Sebok. Prizewinner of the following Polish competitions: 4th Polish Festival of Young Musicians; 2nd Polish Competition of Piano Music. Entered semi-finals of 9th International Chopin Competition, Warsaw, 1974 (won 4th award); Piano Competition in Terni, Italy, 1975 and ARD Piano Competition in Munich in 1978.

She gives performances both in Poland and other countries. Her repertoire ranges from Baroque to 20th c. music and includes works of Mozart, Beethoven (Sonata op. 106 among others), Schubert, Schumann, Chopin, Debussy, Bartok and others. She has also given first performances of Polish contemporary composers. Chamber music is amongst her favourites; she has played in piano duet, piano and violin, piano and cello, piano and flute; trio and quintet. She has also performed with singers such as Urszula Kryger, Piotr Kusiewicz, Florian Skulski and others.

According to some music reviewers “...her performance of G-major concert by Beethoven was an extremally successful creation...”; “... Chopin's music played by Katarzyna Popowa-Zydroń seems to be contemporary, full of simplicity, deprived of any exaggeration. The lyricism of Chopin's music is profound as well as his moods tragic...”; “... The pianist has once again proved her high standards. On the stage again after a long span of time, she showed again her stamp of genius, her exquisite multicoloured tone and mastery of the keyboard...”; “... her extraordinary sense of soundquality. The pianist was able to build up a totaly personal world of music. Her sounds was moving; it made us sad, marvelled, relaxed. Katarzyna Popowa-Zydroń is an artist of thoroughly romantic nature. Her great commitment and a deeply convincing interpretation engage the audience and create a new reality. The mastery of her technique, musicality of the highest order, her extraordinary individual interpretation showed the great range of musical abilities”.