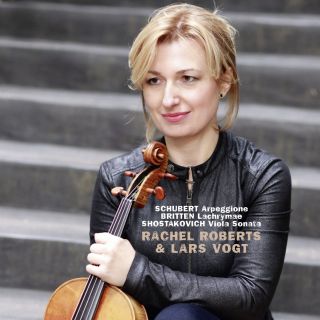 Catalog number: AVI 8553245
Releasedate: 19-02-16
- The three pieces may be the most important ones for the Viola repertoire.
- Rachel Roberts counts as one of the leading English Viola Players turning into an international career as soloist, chamber musician and leader of orchestral playing.
- Lars Vogt is regarded as one of the best chamber musicians and partners for hos colleague and ever-present on all podiums of the world.

SECRET MESSAGES
Rachel Roberts: Schubert’s Arpeggione sonata D 821, is perhaps the only significant work we have for it today.  My approach to this piece has changed considerably since I first approached it over thirty years ago. As a child I enjoyed it for its beautiful themes and the seemingly happy, outwardly dance-like nature. With time, and a broadening acquaintance with Schubert – his language and individual code of writing, his character and life-events – I no longer feel only that element of simplicity or playfulness. The frequent reiteration of pianissimo and piano seems an expression of intimacy and intensity; the music’s meaning in this context becomes something extremely personal and nuanced, as though Schubert is confiding a deep secret, whatever the immediate nature of the theme may appear to be. Benjamin Britten’s "Lachrymae“ Op. 48, subtitled “Reflections on a Song of Dowland”, dating 1945, is a theme and set of variations inspired by the sad lament of unrequited love, “If my Complaints could Passions Move”, written by John Dowland, the Elizabethan lutenist and composer (1563-1626). Britten wrote the piece for the violist William Primrose and the two artists premiered the piece at Aldeburgh Festival in June 1950. Britten was an enthusiast of traditional forms and his compositions widely reflect his fascination with old English music and the folksongs of England, Scotland, Ireland and France.... Shostakovich’s Sonata for Viola and Piano, opus 147, his last composition, is one of the most profound and harrowing statements of the composer’s most intimate thoughts and feelings ........
Rachel Roberts performs internationally as soloist and chamber musician. As soloist she has collaborated with conductors Christoph von Dohnanyi, Andras Schiff, Richard Hickox and Martyn Brabbins performing concertos with the Philharmonia Orchestra, Cologne Chamber Orchestra and Kammerphilharmonie Graubunden in Switzerland amongst others. Rachel Roberts has played chamber music at Concertgebouw, Amsterdam, Musikverein (Grand Saal) Vienna, Alte Oper, Frankfurt, Wigmore Hall, Royal Festival Hall, Cadogan Hall and King’s Place. She appears at international festivals including Salzburg Festival, Wiener Festwoche, Schubertiade – Schwarzenberg, SPANNUNGEN, Mecklenburg Vorpommern, Hamburg “Oestertone”, Lofoten Norway and Stift Holland. Prizes for chamber music include the Diapason d’Or, ‚Supersonic Award’ and CD of the
month in Fono Forum Magazine, Germany. Highlights in 2015 include a Wigmore Hall concert with Joshua Bell, Steven Isserlis, BBC Radio 3
recitals with the London Conchord Ensemble, live Deutschlandfunk broadcasts with the Tetzlaff Quartet and a solo CD release with pianist Lars Vogt. In May 2015 she has toured Japan with Christian Tetzlaff, Lars Vogt, and Tanja Tetzlaff. Rachel Roberts is Professor of Viola at the Guildhall School of Music and Drama. She has given masterclasses at the Britten Pears Young Artists Programme, Dartington International Summer School,
Chethams School of Music and Birmingham Conservatoire.

Lars Vogt has established himself as one of the leading musicians of his generation. Born in the German town of Düren in 1970, he first came to public attention when he won second prize at the 1990 Leeds International Piano Competition and has enjoyed a varied career for nearly twenty-five years. Lars Vogt is now increasingly working with orchestras both as conductor and directing from the keyboard. In September 2015 he took up his post as Music Director of Royal Northern Sinfonia at Sage, Gateshead reflecting this new development in his career. During his prestigious career Lars Vogt has performed with many of the world’s great orchestras. He has collaborated with some of the world’s most prestigious conductors. His special relationship with the Berlin Philharmonic has continued with regular collaborations following his appointment as their first ever “pianist in Residence” in 2003/4.
Lars Vogt enjoys a high profile as a chamber musician, in June 1998 he founded his own chamber festival in the village of Heimbach near Cologne. Known as Spannungen, the concerts take place in an art-nouveau hydro-electric power station. He has enjoyed regular partnerships with colleagues such as Christian and Tanja Tetzlaff, Ian Bostridge and Thomas Quasthoff and collaborates occasionally with actor Klaus- Maria Brandauer.
A passionate advocate of making music an essential life force in the community, in 2005 Lars Vogt established a major educational programme Rhapsody in School which brings his colleagues to schools across Germany and Austria, thereby connecting children with inspiring world-class musicians. He is also an accomplished and enthusiastic teacher and in 2013 was appointed Professor of Piano at the Hannover Conservatory of Music, succeeding Karl-Heinz Kämmerling, his former teacher and close friend. Lars Vogt has recorded many CDs. Sir Simon Rattle describes him as "one of the most extraordinary musicians of any age group that I have had the fortune to be associated with".