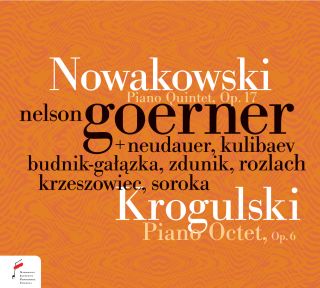 Catalog number: NIFCCD 105
Releasedate: 10-06-16
- Nelson Goerner in a chamber music line-up
- Two unknown works that shine in a new life in the hands of a group of great musicians
Unknown Pearls of 19th-century Polish Music. The Fryderyk Chopin Institute presents wonderful Polish chamber music in the interpretation of leading European musicians: Nelson Goerner piano, Lena Neudauer violin, Erzhan Kulibaev violin, Katarzyna Budnik-Gałazka viola, Marcin Zdunik ’cello, Sławomir Rozlach double bass, Jan Krzeszowiec flute and Radosław Soroka clarinet. Józef Nowakowski’s Piano Quintet in E-flat major and Józef Krogulski’s Piano Octet in D minor are two pieces, today little-known, by composers contemporary to Chopin. Written at the beginning of the 1830s, they are a testimony to the rich cultural life of Poland, which at that time was absent from maps of Europe. This extraordinary recording is an evocation of an œuvre important in the history of Polish music. Interpreted by superb artists enjoying widespread recognition, this CD can be considered a pearl of Polish phonographic art. The recording features Nelson Goerner, an artist devoted to popularizing Polish music around the world who has yet again been honored with the prestigious Diapason d’Or award, this time for his previous album released by The Fryderyk Chopin Institute: Concerti by Ignacy Jan Paderewski and Giuseppe Martucci.
Nelson Goerner has performed with many of the major orchestras including the Philharmonia Orchestra under Claus Peter Flor, the Deutsche Symphonie Orchestra of Berlin under Andrew Davis, the London Philharmonic Orchestra under Emmanuel Krivine, the Hallé Orchestra under Mark Elder, the Suisse Romande with Neemi Jarvi and Raphael Fruhbeck de Burgos, the Orchestra of the 18th Century with Frans Bruggen, the Deutsche Kammerphilharmonie with Ivor Bolton, and the NHK Symphony Orchestra of Tokyo under Fabio Luisi.

In the 2013-14 season, Nelson Goerner was the subject of the Artist Portrait series at the Wigmore Hall in London, where he gave four recitals exploring such diverse repertoire as Bach, Mozart, Beethoven, Brahms, Schumann, Chopin, Debussy and Bartok.

The 2015-2016 season includes recitals in London, Paris, Toulouse, at the Menton Festival, in Eindhoven and Den Haag, Geneva, Ravenna, San Francisco and Buenos Aires. Nelson Goerner's concerto appearances will include the BBC National Orchestra of Wales, the Singapore Symphony, the Liege Philharmonic, and the Nord Nederlands orchestra.

A keen chamber musician, Nelson Goerner has collaborated with artists such as Martha Argerich (in repertoire for two pianos), Janine Jansen, Steven Isserlis and Gary Hoffman.

Nelson Goerner has a strong connection with the Mozarteum Argentino in Buenos Aires, and a student scholarship has since led to many performances. Mr Goerner also enjoys a long association with the Chopin Institute in Warsaw, where he is a member of the artistic advisory committee. With the Institute, he recently explored the interpretation of Chopin on contemporary pianos by Pleyel and Erard dating from 1848 and 1849. These performances were recorded for the Chopin Institute's own label, with the recording of the Ballades and Nocturnes winning a Diapason d'Or.

Born in San Pedro, Argentina, in 1969, Nelson Goerner has established himself as one of the foremost pianists of his generation. After studying in Argentina with Jorge Garrubba, Juan Carlos Arabian and Carmen Scalcione, he was awarded First Prize in the Franz Liszt Competition in Buenos Aires in 1986. This led to a scholarship to work with Maria Tipo at the Geneva Conservatoire, and in 1990 Nelson Goerner won the First Prize at the Geneva Competition.